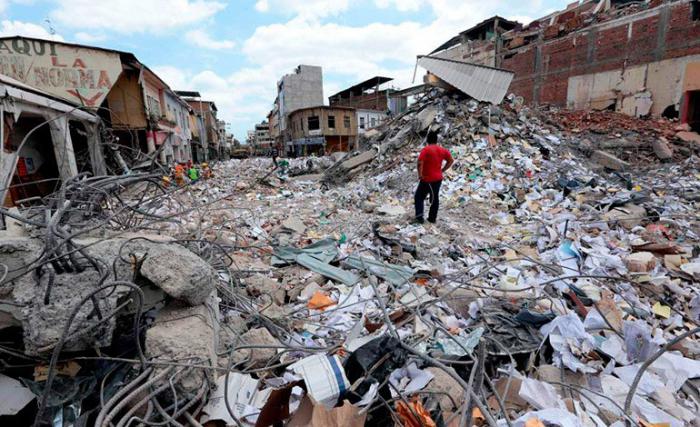 The death toll following the earthquake that shook Ecuador on April 16 has risen to 655, while almost 30,000 people have been left homeless, 17,638 have sought medical attention for injuries caused and 48 people remain missing, according to information provided at press time by Ecuador's National Secretariat for Risk Management. Meanwhile, President Rafael Correa has toured the provinces most affected by the quake.

Correa began by spending three days touring the province of Manabí, the hardest hit in the country. The response from several countries was prompt, with humanitarian aid arriving on large planes, in order to meet the immediate needs of the thousands of victims.

Cuba sent a brigade from the Henry Reeve International Contingent of Doctors Specialized in Disaster Situations and Large-Scale Epidemics, as well as a search and rescue team the very next day, to provide immediate assistance to survivors. President Correa championed the island’s solidarity: “We count on the solidarity of Cuba and Cuba can count on that of Ecuador,” he noted.

Correa also expressed his gratitude to everyone who had worked to assist the country following the disaster, and stressed that after the initial disorder, the country had reacted very well. “All affected areas are now provided with health care services, water, food and public safety,” he noted on his Twitter account.

The President added that the government will being installing adequate camps to house all those who lost their homes, as the reconstruction process will be lengthy.

Up until the afternoon of Wednesday, April 20, the government had reported a total of 5,733 injured and 163 missing, in addition to over 20,000 people in shelters and 1,116 buildings destroyed.

As reported by AFP from Quito, Correa explained that part of the aid received from abroad will be used to pay families to temporarily accommodate those left homeless.

The quake devastated the northwestern coast of the country, also destroying roads and bridges.

The UN Under-Secretary-General for Humanitarian Affairs and Emergency Relief, Stephen O'Brien, toured the disaster areas and announced that the UN will request urgent assistance totaling 73 million dollars from the international community to assist the recovery efforts.

In addition to the hardest hit provinces of Manabí and Esmeraldas, the quake also caused extensive damage in Guayas, Los Ríos, Santa Elena and Santo Domingo de las Tsáchilas, while concerns remain given the aftershocks that will continue to occur almost successively, according to reports from the Ecuadoran National Geophysics Institute.

The United Nations Children’s Fund (UNICEF) called for aid to be sent for Ecuadoran children left homeless, while the correspondent in Quito of Peruvian newspaper El Comercio, referred to the dramatic images published by the international agency of the coastal town of Pedernales, the epicenter of the country's worst earthquake in 70 years. The paper quotes a child from the area: “Many people I knew died trying to save themselves, trying to save their families.”

Meanwhile, President Correa shared a letter on his social media accounts which he had received from a little girl named Sol Díaz, from the city of Cuenca, in which she writes: “Through this letter I wish to say that in these difficult times you are not alone, many people support you. Have faith and hope that little by little, our country will move forward.”

As reported by Cubadebate, Correa announced emergency income tax increases to fund the recovery. Those with over one million dollars in assets will be charged a one-time levy of 0.9% on their wealth, while those earning more than $1,000 dollars a month will have to contribute a day's wages, and so on according to income.

In addition, value-added tax (VAT) will rise by 2% for a year and there will be a one-time 3% surtax on profits, once approved by the National Assembly.

Official figures estimate that the damages, including to buildings, houses, schools and infrastructure across the country, could reach three billion dollars.
In this regard, the Ecuadoran government has established a committee to oversee the reconstruction efforts, together with the private sector, to revive production and housing construction in the areas affected by the 7.8 magnitude earthquake.

The measure was agreed on April 25 at a governmental meeting led by President Correa and Vice President Jorge Glas.

As Glas told news agency Andes, the committee’s tasks will be focused on the provinces of Esmeraldas and Manabí, as the most badly affected by the quake.

He explained that the scope of the efforts will range from attending to affected families to rebuilding large amounts of infrastructure, including housing, utilities, roads and fueling production.

According to the latest report from the National Secretariat for Risk Management, as quoted byteleSUR, the earthquake completely destroyed 6,998 buildings and caused damages to a further 2,740, mainly in the coastal towns of Manta, Portoviejo, Pedernales, Bahía, Jama, Canoa and Muisne.

As a result of the damages, 29,067 people are currently staying in shelters set up by the government while new housing is built, and mobile classrooms have also been established, in the effort to restore order across the country.