How you can help Ecuadorians affected by deadly earthquake

Published on 20 April 2016 by teleSUR English 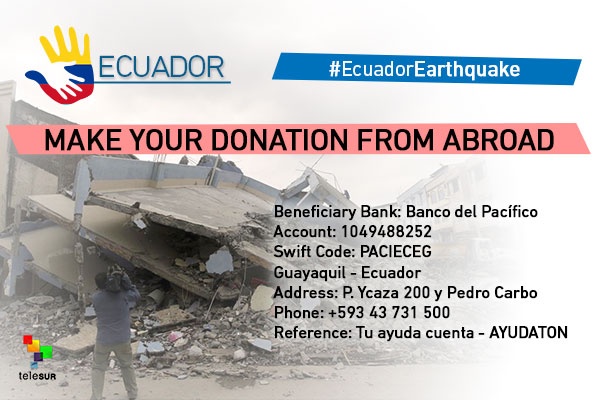 As the number of victims and injured keeps rising on the coast of Ecuador after the 7.8 magnitude earthquake that hit Saturday night and a series of strong aftershocks, the government has been organizing local and regional support. But with the devastating consequences of the earthquake, any help is welcomed.

The authorities have put in place a national and international relief effort. The National Assembly posted on Twitter a list of useful items to send to the devastated areas, such as first aid medicine, canned food, bottles of water, mattresses, tents, and mosquito nets.

Now those who wish to help from outside of Ecuador can donate through a national bank account set up by the government for reconstruction efforts.

The government sent about 10,000 members of the country's Armed Forces to the devastated areas. They brought about 50,000 gallons of water to Pedernales, a small coastal village reported to be about 70 percent destroyed, and transported several injured from one city to another so they could receive medical attention.

In Ecuador, people have successfully responded to the donation points set up in supermarkets and other spots, in coordination with the United Nations.

With the hashtag #DesaparecidosEC (Disappeared in Ecuador), people have also launched a campaign to research their relatives and friends, as telecommunications and electricity supplies have not been reestablished yet. The government launched a People Locator online, as well as on Facebook, Skype and Google.

Many families remain in the streets as they fear going back to their home with the possibility of aftershocks, like the 6.1 magnitude one that struck the Ecuadorean coast around 2 a.m last night.

Since Saturday night, messages of solidarity have come from around the globe, including most Latin American leaders, while Venezuela, Bolivia, El Salvador and Colombia have sent rescue teams to the Ecuadorean coast. But support also came from Spanish Prime Minister Mariano Rajoy, who called President Rafael Correa directly, U.K. Prime Minister David Cameron and Russian President Vladimir Putin, among others.

“In Russia we share the pain and sorrow of those who lost relatives and loved ones in the catastrophe, and we wish a prompt recovery for all the people affected,” Putin said in a telegram.