Published on 22 December 2015 by www.revolutionarycommunist.org 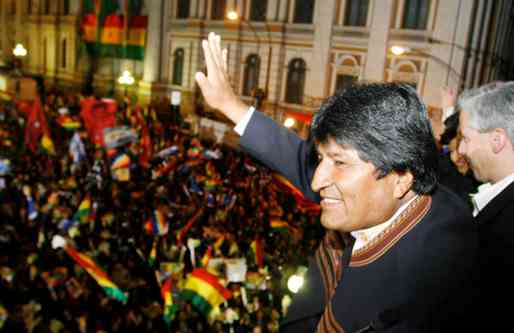 Ten years of the Movement Toward Socialism in government

Led by the government of Evo Morales and the Movement Toward Socialism (MAS), Bolivia has undergone a profound transformation in the past ten years. The change is not just in the economic sphere, but in the shift of political power away from the traditional elite, the mostly white owners of industry and agriculture, and towards the majority, the mostly indigenous workers and campesinos.

Evo Morales emerged as a leader of coca growers in Chaparé province, who were fighting against US-funded eradication of their crops. He first ran as presidential candidate for MAS in 2002, and narrowly lost. At the next election, on 18 December 2005, Morales and MAS won with 53.7% of the vote, a previously unheard of majority in Bolivia. The previous five years had seen six presidents come and go as a result of constant political crises. It was during this period that mass struggles against neoliberal austerity - the Water War and the Gas War - paved the way for the MAS victory.

The Water War was sparked by a 1999 agreement by the government of Hugo Banzer to privatise the water supply in Cochabamba province. This was made in order to meet privatisation targets set by the World Bank in return for $600m debt relief. The new owner, a consortium run by US multinational Bechtel, was guaranteed an annual profit rate of 16% over 40-years.

Workers and campesino organisations came together to form a Coalition for Defence of Water and Life. Over a period of six months they organised strikes and blockades, regularly bringing Cochabamba to a standstill. Key decisions affecting the movement were approved at open-air meetings attended by up to 50,000 people.

The cancellation of the water contract as a direct result of the protests marked a turning point for Bolivia’s anti-austerity movement, showing that popular forces could defeat neoliberalism.

Three years later the then president, Sanchez de Lozada, was forced to resign after another huge uprising, this time against contracts to sell gas overseas that saw only 18% of the profits going to the state, and the rest to foreign multinationals.

In September 2003, in El Alto, a city of 750,000 indigenous people on the northern edge of La Paz, a civic strike blocked the main road into the city. By October there were severe shortages of petrol and food in La Paz. The Army fired on the blockaders with tanks and planes, killing 30 people over two days. In the end, miners successfully crossed army lines and marched on the presidential palace. Lozada was forced to flee the country along with several ministers. The political crisis was not resolved until Morales’ election at the end of 2005.

On May Day 2006, four months after taking office, Morales declared Bolivian gas the sovereign property of the Bolivian people. There followed a complete reversal in the relation between the Bolivian state and multinational companies. Bolivian troops entered 56 gas installations, preventing key documents from being removed so that the government could audit their accounts. Multinationals were given 180 days to renegotiate their contracts. The state’s share of profits from the largest oil fields rose to 82%, with a 60% share of minor deposits. The state took a 51% share in the country's two largest gas refineries, both owned by the Brazilian gas firm Petrobras.

As a result the total gas revenue received by the state during the first six years of the Morales government was around seven-times more than revenue for the five previous years. In 2011, in one year, the state received almost as much revenue as it did during the whole nine-year period 1996-2005.

The MAS government has invested gas revenue in strategic areas in order to diversify and strengthen the national economy. This, combined with strong gas prices on the international markets, has meant that the economy grew at an annual average of 3% over the period 2006-2014 (compare this to 0.9% during 1994-2005). Rather than multinationals being scared away by nationalisations, Bolivia currently has the highest rate of foreign direct investment as a percentage of GDP of any country in South America.

Public investment doubled between 2006 and 2014. A state pension has been introduced for the first time, as well as state benefits for families with young children attending school.  From 2005-2014, the real minimum wage increased by 87.7 percent. As a result, Bolivia’s poverty rate has reduced from 59.6% to 45% during 2006-2014 and is still falling.

Other achievements of this period were:

One of the first actions of the MAS government was to convene an assembly to create a new constitution guaranteeing key political and economic rights. This came into effect on 7 February 2009 after being approved in a referendum by 61.43% of voters with 90.24% participation, despite bitter opposition from the right-wing opposition.

Guarantees of the Bolivian constitution include:

Right-wing destabilisation and US interference

Bolivia’s ‘media luna’ (half moon) region refers to the crescent-shaped lowland areas in the east of the country. These five provinces have more resources, agricultural land and a richer (and whiter) population than the rest of Bolivia. Thousands of European fascists settled here after fleeing Yugoslavia and Germany at the end of the Second World War and fascist groups still operate there today. Unsurprisingly these regions are a stronghold of vicious right-wing resistance to the MAS government. In 2008 violent protests broke out in Santa Cruz, the richest of the media luna provinces, culminating in the racist lynching of 11 MAS supporters in the Pando Massacre. The right-wing were demanding secession from the rest of Bolivia and an illegitimate referendum was held that would have allowed Santa Cruz  to set its own international relations, immigration policy and taxes, as well as run its own police force. The real aim was to end the limited land reform that the government was carrying out. Similar protests and demands were being made in four other lowland provinces.

Subsequently proof emerged of US Agency for International Development (USAID) support for the violent protests. A US State Department cable released by Wikileaks and dated April 2007 discusses ‘USAID’s larger effort to strengthen regional governments as a counter-balance to the central government.’ This effort included more than $4m funding for media luna local governments and indigenous groups opposed to Morales. As the opposition protests intensified, the US made secret plans for intervention in the event of a coup against Morales, also documented by Wikileaks.

The right-wing protests were eventually held in check when the local indigenous population rioted against the separatist referendum, which was subsequently declared illegal under Bolivia’s constitution. Morales expelled USAID from Bolivia in 2013, for interference in Bolivian affairs.

Bolivia under Morales has become a powerful and important voice on the international stage. It is a strong defender of anti-imperialist principles, showing solidarity with the Palestinian struggle, condemning Cuba’s exclusion from the Organisation of American States and breaking diplomatic relations with the illegitimate Honduran government after the coup against Manuel Zelaya in 2009.

Central to Bolivia’s internationalism is ALBA, the Bolivarian Alliance of the Americas. Bolivia became the third ALBA member, after Cuba and Venezuela, in January 2006. Bolivia declared itself free of illiteracy after a literacy campaign, launched in 2006 with help from Cuba and Venezuela, taught 800,000 people to read and write. By 2009 444,000 Bolivians had received sight-saving operations through Operation Miracle, the Cuban-Venezuelan initiative to provide free eye surgery throughout Latin America and the Caribbean. Thousands of Cuban doctors are still delivering basic healthcare in the poorest regions of Bolivia under the auspices of ALBA. Trade within ALBA has helped Bolivia to mitigate the effects of being expelled from the US-led Andean Trade Preference agreement after Bolivia cut diplomatic relations with the US and threw out USAID because of its funding of the Bolivian opposition.

Militant protests have not gone away under Morales. In fact, the period 2009 - 2014 saw the most protests in Bolivia’s history. Protests range from demands for higher wages, to opposing planning projects such as the TIPNIS highway (seehttp://bit.ly/1T7atTP) and more recently, the child labour law and regulation of the mining industry (see http://bit.ly/1QDu8NX).

Rather than using police or the army to put down protests, the MAS government has taken the approach of seeking dialogue and consultation with affected groups. For example, with TIPNIS, a proposed highway to be built through Bolivia’s Isiboro Secure National Park and Indigenous Territory (TIPNIS), the government launched a mass consultation with 69 indigenous communities, 55 of whom subsequently approved the construction. This was despite political interference by the US, which directly funded of one of the indigenous groups opposed to the scheme - Eastern Bolivia Indigenous Peoples and Communities Confederation (CIDOB) - via the US National Endowment for Democracy, which channeled more than $7m to opposition groups in ALBA countries during 2013 alone (see http://goo.gl/rxCGi5).

In the October 2014 election the Morales government was returned to government for the third time, with a commanding 61.36% of the popular vote. Morales was due to step down as President at the 2019 election but the Bolivian senate has now approved a crucial referendum to extend Presidential term limits, which will take place in February 2016.

Given its past form we can be sure that US imperialism has not stopped its direct support for opposition groups in the resource-rich eastern regions. The recent revelation of the US National Security Agency’s massive electronic surveillance of the PDVSA, Venezuela’s national oil company, is a rare glimpse of the kind of surveillance and sabotage that is going on all the time against ALBA countries.

The opposition election victory in Venezuela will have emboldened the right wing across Latin America and it is just a question of when, not if, the next coordinated campaign of destabilisation will happen in Bolivia. However, the government and its people know what is at stake and have their eyes open to the threat. The new leaders and organisations that have emerged among workers and the indigenous poor over the past fifteen years will defend the gains that have been won and block imperialism’s plans.