Published on 6 April 2017 by www.revolutionarycommunist.org 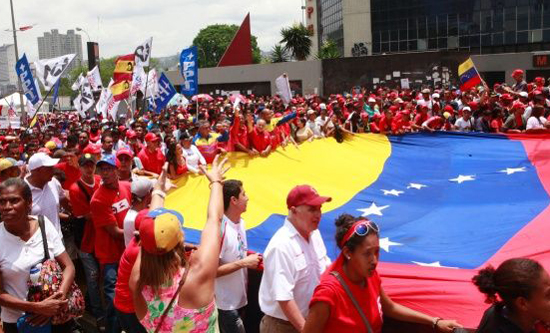 On 29 March the Venezuelan Supreme Court (TSJ) ruled that it had to assume Congress’s functions directly ‘to ensure the rule of law’ for an ‘interim period’. Contrary to the lies of CNN and other imperialist propaganda organs, this was not the ‘dissolution of Congress’. The ruling was made as a result of a serious impasse because legislation had been passed including the votes of three illegally-elected opposition MUD representatives, in contempt of the Supreme Court’s rulings. The Supreme Court decision provided an excuse for a storm of anti-socialist opinion in the Americas and caused disagreements in President Maduro’s Great Patriotic Pole alliance. On 31 March the President asked that the ruling be reconsidered, and it was subsequently withdrawn.

In the December 2015 elections, the majority opposition MUD (Democratic Unity Roundtable) claimed to have won 112 of the 167 seats. However, the election of four of the MPs from Amazonas state were immediately suspended by the Supreme Court following representations by the National Electoral Council (CNE), because of accusations of voter fraud and election irregularities. Two of the four were MUD opposition deputies, one was their ally, and one was from the President’s alliance, the Great Patriotic Pole. This left the balance 109 to 55, or 66% and not the super-majority which would have allowed MUD to attempt a massive reversal of all the gains made by the people over the last 18 years.

As soon as the new Congress opened in January 2016, the three suspended MUD representatives were illegally sworn in. Found to be in contempt of court, the MUD majority backed down, but reinstated the three again in July 2016. The Presidential coalition, in contrast, accepted the suspension of its representative. In August 2016, the Court declared that the National Assembly Presiding Council and the opposition deputies were in contempt of court for having broken two of its rulings. Since its election the extraordinarily vitriolic and reactionary main opposition party, has spent all of its energies and the time of Congress trying to expel the President. The presidential elections are not until 2018 and President Maduro's term ends in April 2019.

The situation could be resolved immediately if MUD removed their three suspended members of Congress. The MUD refuses to do so because they are aiming to force the State President out of office. Because of the on-going impasse, in October 2016 President Maduro was forced to circumvent the National Assembly altogether by putting the national budget to a chamber of the Supreme Court rather than the legislature. This situation has hardened this month.

The precipitating factor had been the obstruction by MUD of the authorisation of joint ventures in oil, potentially with Russia and China. Such ventures are a red rag to US imperialism. The Supreme Court ruling also gave President Maduro widespread powers to authorise such oil joint ventures without Congressional approval. Stable trading and pricing arrangements with non-western corporations would assist the Venezuelan economy, where 50% of the GDP is from oil income, and oil constitutes 95% of export revenues.

The shameless and repeated efforts by imperialism to oust its socialist opponents from government in Venezuela have continued since 2000:

The National Assembly itself called on the Organisation of American States (OAS) to invoke its Democratic Charter against Venezuela. Though defeated, in effect it called on OAS members to violate Venezuelan sovereignty, revealing the shocking and violent intentions of the Venezuelan oligarchy.

This unceasing campaign, which until December 2015 was constantly held back by the massive support for the government in 20 elections, is now aimed at taking full advantage of the calamitous fall in oil prices and the consequent recession, the dependence of the economy on outside suppliers, and the damage done by criminal manipulation of the currency by the bourgeoisie. The economy has been hit by the crisis of imperialist accumulation, just as in Brazil and Argentina, but in Venezuela the government is not a tool of imperialism, attacking the mass of the people. US imperialism, its economic hitmen and regional allies vigorously support every action of the MUD coalition to make the Venezuelan people pay for US imperialism’s own crisis.

On 9 March 2015 President Obama – in support of the Venezuelan opposition’s election campaign - issued an Executive Order declaring a ‘national emergency with respect to the unusual and extraordinary threat to the national security and foreign policy of the United States posed by the situation in Venezuela’. The backlash was so great that Obama was eventually forced to concede that Venezuela ‘does not pose a threat’ to the US. On 3 March 2016 Obama again claimed that Venezuela posed an ‘unusual and extraordinary threat to the national security’ of the US, and imposed economic sanctions.

The events preceding the recent Venezuelan Supreme Court’s decision are notable. The court ruling came just one day after 20 members of the OAS, including the US, Brazil and Mexico, met at an extraordinary meeting to demand dialogue between President Maduro’s government and the opposition. This coincided with a US Congressional hearing on Venezuela and fresh calls for ‘democracy’ from Federica Mogherini, the EU’s foreign policy chief. The US Senate had already called for new action against the Venezuelan government in February. This corralling of pro-imperialist opposition to the Maduro government in Venezuela is part and parcel of the US battle to exclude Russian and Chinese economic interests from the region, as well as the essential battle against socialism, the fundamental threat to US imperialism.

The US government immediately condemned the Supreme Court decision, in sharp contrast to its attitude to the ‘legal’ coups against the Honduran and Paraguayan presidents, and called for new elections while freeing the MUD opposition of constraints in Congress to vote as it wished. This would include releasing prisoners sentenced for violent assaults on police and government supporters in the run up to the December 2015 Congressional elections.

Julio Borges (MUD), the Assembly’s president, has called for the army to stop the government, insisting that it should be ‘the first (sic) guardian of democracy’, so showing the real instincts of the right wing. He bluntly said ‘The National Assembly will not recognise the Supreme Court, because we were elected by 14 million Venezuelans.’ Borges falsely asserted that ‘The Supreme Court elected themselves. The court is acting outside of the constitution.’ Encouraged, anti-government protesters tried to storm the Supreme Court on 30 March as the National Guard blocked access.

The US and the United Nations protested. Colombia, Chile and Peru withdrew their ambassadors over the ruling. The South American trade bloc, Mercosur, which suspended Venezuela in December 2016, called an emergency meeting for Saturday 1 April in Argentina. The OAS said it would hold an emergency meeting at its Washington headquarters on Monday 3 April to discuss the ‘self-inflicted coup’.

The critical factor at the moment is the economic recession, exacerbated by a foreign currency shortage in a country heavily dependent on international supplies. On 24 March the government asked the UN for help in dealing with Venezuela's medicine shortages, which have grown severe as the country grapples with the crisis. The GDP is falling at a rate of about 7% per annum. The Venezuelan government and security forces are prepared to control any violent outburst by the business elites who continue to send small provocative middle- class groups of demonstrators from the prosperous zones in East Caracas to the government centre. What is required is the imposition of workers control in all work places to coordinate the production and distribution of all the essential goods and services. Simply threatening the owners is quite inadequate.