Palestinians rally in solidarity with Venezuela

Published on 21 March by TeleSUR English 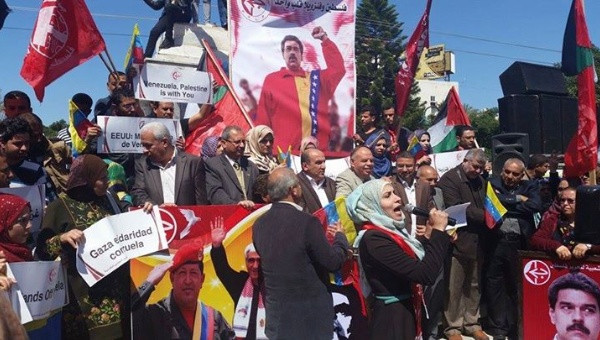 As Palestinians continue to face economic hardships and services and housing shortagtes after the Israeli bombardments last year, dozens of Gazans joined a rally on Saturday morning in solidarity with Venezuela.

teleSUR’s correspondent in Gaza, Noor Harazeen reported from the rally that attendees were calling for the U.S. to keep its hands off Venezuela. The event was organized by the Popular Front for the Liberation of Palestine (PLFP), and several Palestinian officials attended, including Sami Abu Zuhri from Hamas.

“In light of the terrible threats that the government and people of Venezuela have received from the U.S. government ... all sorts of people have mobilized in support of the Venezuelan people ... The only threat to humanity is the government of the United States and its allies ... And the people of Gaza, are showing their love today in the streets, their support for Venezuela,” Valeria Cortes, one of the organizers, told teleSUR.