Justice for the Cuban 5! - Book review 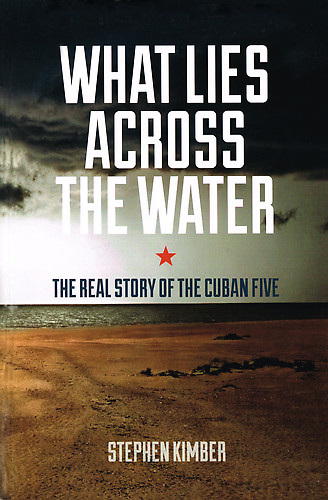 What lies across the water, Stephen Kimber, Fernwood Publishing 2013, Can$19.95

Stephen Kimber’s remarkable work is both a forensic expose of anti-communist terrorism and the definitive guide to the story of the Cuban Five. With in-depth analysis of the activities and motivations of many key players in US-Cuban relations over the last 50 years and a detective-thriller writing style it is both highly readable and politically explosive.

In September 1998, five Cuban intelligence agents – Gerardo Hernandez, Ramon Labañino, Antonio Guerrero, Fernando Gonzalez and Rene Gonzalez – were arrested in Miami. The story of the necessity of their presence on US soil, infiltrating terrorist networks amongst the febrile world of Miami’s rightwing Cuban exile groups, reveals a hidden history of CIA-assisted intrigue. Their trial and the conditions of their imprisonment demonstrate the ruthlessness of the imperialist state and the thinness of the veneer of fairness that covers its oppressive ‘justice’ system.

Kimber reveals the existence of a widespread terrorist conspiracy among Cuban exile organisations. For every successful murderous plot such as the 1976 Cubana Airlines bombing, which killed 73 civilian passengers, or the 1997 Havana hotel bombings, there are many more abortive or less spectacular attacks. Kimber exposes not just the involvement of the key figures of anti-communist terrorism, the real-life movie villains Luis Posada Carriles and Orlando Bosch, but also the clear trail of money and support for them from supposedly ‘mainstream’, US government-friendly organisations such as the Cuban American National Foundation.

Time and time again members of these groups are discovered planning terrorism. The same individuals are arrested in boats crammed with guns and bombs while the same shadowy figures are traced as providing the finance. With links often as far back as the Bay of Pigs invasion of 1961 and with records of involvement in events forming a potted history of CIA activity across Latin America, Kimber makes clear that the inability of the US justice system to make charges stick against these men is no coincidence.

It was the US authorities’ unwillingness to enforce their own laws on paramilitary groups that led to the Cuban 5 being sent to Miami. What lies across the water is an account both of their lives – showing how these five young men were motivated by the need to defend their homeland and socialism against terror – and of their work.

The men’s commitment shines through the account of their training, the challenges of living undercover in the US and the many discomforts of their work. Sent to infiltrate exile plots against Cuba, they overcame shortages of money – each working one or two jobs to supplement the tiny living expenses afforded by Cuban intelligence – loneliness and the fear of betrayal, to rapidly report back on planned attacks.

By 1996 the US FBI and Cuban intelligence were discussing the evidence obtained by the five men. Even in May 1998, months before the five’s arrest, Kimber shows that US diplomats in Havana continued to ask for further information on terrorist plots from the Cubans. Yet, rather than follow up this information and act against the Miami-based paramilitaries and their funders, the US opted to end its investigations and arrest the five.

Kimber demonstrates the corruption and distortions used to charge, try and convict them. As the five were not found with any classified information, the US authorities were not able to charge them with espionage, instead settling for the lesser charges of conspiracy and acting as unregistered foreign agents. Following political pressure from Cuban-American representatives, it was decided to additionally charge some of them with conspiracy to murder, linked to the shooting down of an exile plane which had penetrated Cuban airspace. The fact that the men charged with offences relating to this, most seriously Gerardo Hernandez, the commanding officer, had no involvement in the Cuban decision and, in Hernandez’s case, was not even operational at the time, was deemed irrelevant. In the end, even the prosecution decided the most serious charge did not have enough evidence to stand.

The jury, recruited from rabidly anti-communist Miami, did not care about niceties of evidence or proof and found the five guilty of all charges, including those the prosecution had asked to be withdrawn. Kimber shows how the trial was heavily influenced by corrupt officials, the political demands of extreme anti-communists and its location in Miami.

As the five themselves have stated: ‘The US legal system was openly utilised as a means of protecting the terrorists and, in an atmosphere of lynching, we were subjected to a rigged trial.’

The Cuban 5 received extraordinary sentences, ranging from 15 years to life. Both before and after their conviction, the five men were placed in isolation – in an attempt to get those charged with lesser attempts to testify against their comrades or the Cuban leadership. For Rene Gonzalez, this meant the deportation of his wife Olga, a legal US resident, and years of separation. For Gerardo Hernandez and his wife Adriana Perez it has meant repeated denials of visitation rights and years of separation.

This book provides a definitive guide to both the case of the Cuban 5 and the hollow lies of the US’s ‘war on terror’ rhetoric. Time and again it is shown sheltering known terrorists within its borders. While attacks on the US are used to scare the population into backing imperialist assaults, the reasoned decision of Cuba to send its agents to prevent attacks on itself are met with a show trial and inhuman sentences.

Kimber’s account of this hypocrisy shows how the capitalist state attacks those who shine a light on its violence. It is a testament to the honour, sacrifice and communist values of the Cuban 5 and a condemnation of the repressive apparatus of imperialism. It is a vital tool in letting the truth of the five be more widely known, and breaking down the wall of silence built to hide the crimes caused by imperialism.