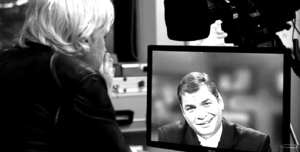 WikiLeaks editor-in-chief Julian Assange went to the Ecuadorian embassy in London on June 19 to apply for asylum, after losing his final appeal in British courts against extradition to Sweden.

The extradition to Sweden is nominally over allegations of sexual assault, for which Swedish authorities wish to question Assange ― who has not been charged. But WikiLeaks supporters point to evidence released by the whistleblowing site this year that the United States government has prepared a secret sealed indictment against him.

Supporters fear that when Assange arrives in Sweden, he will be handed over to US authorities. Assange has said it is his fear that this is the likely outcome that has driven him to appeal for asylum.

Assange also slammed the Australian government, saying it had abandoned him. He said on June 21 that he had not met any Australian consulate official since December 2010.

The decision to seek asylum from the government of Ecuador came after the British Supreme court dismissed Assange's bid to reopen his appeal against extradition.

Lucas also expressed support for WikiLeaks' work in exposing illegal activity by the US. However, the Ecuadorian government later backed away from the invitation.

Assange recently interviewed Ecuadorian President Rafael Correa on his program The World Tomorrow. WikiLeaks has also received support from radical leaders of other Latin American countries, such as Venezuela and Bolivia.

The governments of these countries were elected on the back of big social movements of the poor, replacing US-backed governments that faithfully implemented neoliberal policies that impoverished millions.

WikiLeaks' work in exposing the crimes of US imperialism has aided the struggles of these movements for sovereignty and freedom from exploitation.

Swedish authorities have sought to question Assange for nearly two years for questioning over allegations of sex crimes. Assange made himself available for questioning in Sweden when the allegations first arose, and left the country with permission of the authorities. He has repeatedly said he was willing to be questioned in Britain.

Assange has not been charged with any crime, despite spending about 19 months under house arrest in Britain while challenging the extradition warrant.

Many have questioned Assange's fears of being extradited by the US from Sweden, asking why the US has not simply tried to extradite him from Britain.

Michael Ratner, president emeritus of the US Center for Constitutional Rights and an attorney for Assange and WikiLeaks, told Democracy Now! on June 20 why Assange fears Sweden. Ratner said Sweden has no bail system and Assange would be held in an “almost an incommunicado prison” while he was interrogated.

From there, Ratner said, the US could file an extradition warrant that would keep Assange in jail until he won an appeal against extradition or was taken to the US.

“For the US to move within Britain … it would have complicated matters a great deal, because ... he’s facing a Swedish prosecution...”

Ratner said if the US tried to extradite him from Britain “he would have probably been able to remain on the streets in London, whereas the US … probably understood that as soon as he gets into Sweden, he’s in prison”.

He said: “The UK can take years to get someone extradited [to the US].”

Ratner said the asylum claim was “not about the allegations in Sweden or the interrogation. I think if the United States tomorrow said, 'We will not be prosecuting WikiLeaks or Julian Assange, there will be no indictment of him, the grand jury is over,' etc, etc, I don’t think Julian Assange ... would have any issue about going to Sweden for interrogation on these charges...

“What this is about is the United States wanting to get their hands on him, put him into an underground cell with no communications, giving him life imprisonment.

“And, of course, people have already called for his death in the United States. And he was faced with really a terrible situation, considering ― considering that he is the person who, as a publisher and journalist, has exposed massive U.S. war crimes in Iraq and Afghanistan and the WikiLeaks cables.”

US Secretary of State Hillary Clinton made a rare visit to Sweden on June 3, adding further suspicion of a pre-planned extradition.

The mainstream media and politicians in the US, Britain, Sweden and Australia have worked to soften up public support for Assange to make his prosecution more palatable. One way the media have done is by promoting amnesia in the public about how it began.

Absent from the mainstream media is discussion of the importance of WikiLeaks' work in publishing the largest collection of secret government documents in history. The explosive political content in the documents ― revealing widespread crimes and lies by the US and other governments ― is almost never mentioned in the mainstream press.

Instead, attention has been focused on Assange's character, especially the allegations of sexual assault. However, the personal attacks have gone far beyond this, claiming ― among other things ― he is an egotistical “megalomaniac” who failed to get Brad Pitt and Angelina Jolie to attend his 40th birthday party.

The wave of negative stories has been aimed at damaging Assange's public image. The narrow focus on Assange has allowed the political motivations behind the case to slip out of view.

All allegations of sexual assault are serious and should be treated as such. Women all over the world struggle to have such claims taken seriously. It is wrong for Assange supporters to simply dismiss the claims of the two women involved as lies.

However, the claims against Assange cannot be separated from the circumstances in which they were brought. These circumstances ― almost always missing from mainstream reporting on the case ― show a clear political motivation behind the timing of the government's moves against him and the manner in which he was treated.

Allegations were first made in August 2010, after WikiLeaks' release of thousands of secret documents relating to the US's war on Afghanistan. However, the prosecutor dropped the case soon after. The case was then reopened after interference from Swedish politician Claes Borgstrom, journalist John Pilger said on May 29.

The European Arrest Warrant for his extradition to Sweden was issued in November 2010, straight after WikiLeaks began publishing thousands of secret cables from US embassies.

In such a situation, it is hard to imagine a fair process taking place.

Blame for Assange's situation must also fall on the Australian government. The government has lined up with the US in its hostility to WikiLeaks. Senior government figures have made prejudicial comments about Assange.

In a letter from Attorney-General Nicola Roxon to Assange's lawyer Jennifer Robinson published by WikiLeaks, Roxon refused Assange's right as an Australian citizen to protection and to have requests made on his behalf.

Roxon said Australia would not intervene in any extradition procedures involving Britain, Sweden or the US.

Roxon said that if Assange was prosecuted by the US, Australia would merely “emphasise the expectation that due process would be accorded” and that “he would be subject to procedural fairness and due process enshrined in the United States Constitution and under United States law”.

Australia's inaction reveals its shared goal with the US ― to make an example of Assange for exposing the truth and to strike a blow at all those who fight for the public right to know what the powerful do behind closed doors.

The lengths the powerful go to keep their activities secret shows how big a threat an informed public would be to their hold on power.