Washington and the Cuban migration crisis

Written by Salim Lamrani on 29 December 2015 - Translated by Rédacteur 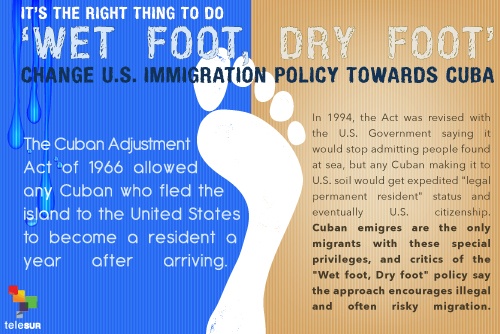 Nearly 6,000 Cubans wishing to emigrate to the United States, are stuck in Costa Rica, without opportunity to continue their journey North. After reaching Ecuador, the only country in Latin America not to require visas to Cubans, they undertook a long journey across the continent to travel mainly to Miami. But their way stopped in Costa Rica. Indeed, the countries of Central America, Nicaragua, Mexico, refuse to let migrants, target of criminal networks, and require a policy response from Washington, primarily responsible for this situation [1].

Indeed, Cubans who enter the United States illegally are welcomed with open arms, while illegal immigrants from other nations are immediately arrested and deported to the country of origin. This specificity is due to the historical commitment of the United States to use the migration issue as a weapon to undermine the Cuban Revolution [2].

In 1959, the United States expressed their hostility to the government of Fidel Castro. They opened their doors to the heirs of the former military regime of Fulgencio Batista, including the security forces involved in violent crimes. Washington also welcomed the country's economic elite and favored the departure of highly qualified personnel in order to destabilize its society.

The impact on Cuba was hard. Indeed, in such a vital sector as health, nearly half of Cuban doctors, i.e 3000 of them had responded to the US Sirens who promised them a better life. This episode has plunged the country into a serious health crisis. Other highly skilled professionals were also encouraged by US authorities to leave the island for more lucrative economic opportunities in Florida [3].

In its war against Cuba, Washington had decided to use the migration issue to destabilize the country. In 1966, Congress-passed Cuban Adjustment Act is unique in the world : it states that any Cuban who immigrated legally or illegally, peacefully or by force, on 1 st January 1959 or later automatically obtains permanent resident status after a year and a day, as well as various social benefits (housing, work, medical care, etc.) as well as the possibility of obtaining the U.S. citizenship after five years [4].

Now, that was a great tool for inciting illegal emigration. Since nearly 50 years, the richest country in the world has opened its doors to the population of a small poor country of the Third World, with limited resources and victim, in addition, to extremely severe economic sanctions. In this logic, the U.S. Embassy in Havana had to concede a visa for all applicants for emigration under this law. But that was not the case. Instead, Washington severely limited the number of visas granted to Cubans each year to stimulate the illegal and dangerous emigration and exploit crises for political purposes. Thus, visaless Cubans wishing to emigrate to the United States were compelled to put their lives on makeshift boats, hoping not to be intercepted by the Coast Guard, or make long journeys across the continent, at the mercy of the people smugglers and criminal gangs of all kinds.

The New York Times has called for the repeal of the Cuban Adjustment Act :

"Still, it is time to do away with the policy, a Cold War relic that is hindering the normalization of relations between Washington and Havana. […] This system has been a boon for human smugglers in Latin America and created burdens for countries from Ecuador to Mexico […] The Obama administration should negotiate a new agreement with the Cuban government that makes orderly immigration the norm. [...] American officials are at a loss to explain the special treatment for Cubans, which stands in stark contrast to the harsh way the United States typically treats Central Americans, including minors, many of whom are fleeing for their lives. [5]. "

Furthermore, for almost 10 years, Washington has also applied a policy to plunder Cuba - country recognized worldwide for the excellence of its health system - its doctors. Indeed, in 2006, the Bush administration has adopted the Cuban Medical Program which aims to encourage the emigration of Cuban medical professionals to the US by offering them the opportunity to practice their trade. This program specifically targets 50,000 Cuban doctors and other health personnel who ply their trade in the rural areas of 60 countries of the Third World, that assist the poor. President Barack Obama, in power since 2009, has not eliminated this device, despite his statements in favor of a normalization of relations with Cuba. [6]

The repeal of the Cuban Adjustment Act and the Cuban Medical Programme is essential in order to build a peaceful relationship between Cuba and the United States. Washington can not expect an entente cordiale with Havana, while maintaining hostile laws that endanger the lives of Cuban citizens.

Thus, a year after the historic reconciliation of December 17, 2014 between Cuba and the United States, many points of disagreement remain between the two countries. For example, President Obama, despite his positive statements, has still not made use of all its powers to bring an end to economic sanctions. These affect the most vulnerable sectors of the Cuban population and is the main obstacle to the development of the island.

Doctor of Iberian and Latin American Studies from the Université Paris IV-Sorbonne, Salim Lamrani is a Senior Lecturer at the University of La Réunion, and journalist specializing in relations between Cuba and the United States.