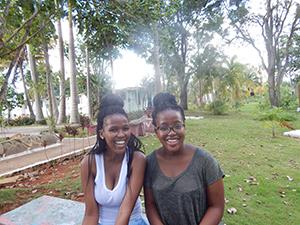 Young Africans Yannick, Joëllevie, Lindokuhle, Thatonatsi, Darions and Abdoulaye, are grateful to Cuba for having welcomed them to the Latin American School of Medicine (ELAM), which has graduated over 24,000 health professionals from 84 countries during its 16 years of existence.

Yannick Alban Joseph, aged 24, from the Central African Republic, tells of the internal conflicts affecting his country, which prevented him from enrolling in a higher education institute on completing his pre-university level education, until his brother informed him of the scholarship to study in Cuba.

“I study medicine because I know that the people lacking economic resources in my city, Bangui, are not treated in hospitals and when I graduate I will help all patients, not because they can contribute financially, but to fulfill my ethical duty to save lives.”

Joëllevie Okombi, from Congo, comes from a family of six children. She always dreamt of being a doctor. “I like to see people happy and healthy. When I see someone suffering from an illness it really hurts me, doctors are professionals who help human beings.”

“The main obstacle,” Okombi adds, “has been the language. I speak French, but on arrival we began a Spanish course, today I have a good command of it and I have done well in my courses. The most satisfying area has been the visits to family doctor surgeries. They gave me the opportunity to relate to Cubans in the community, to discover what their everyday problems are. I would like to devote myself to family and community medicine.”

South Africans Lindokuhle Nyumbeka and Thatonatsi Makgene never feared traveling to another country with a different culture, or being separated from their families. They were confident they would be well received here and treated with affection.

Lindokuhle wants to pursue pediatrics, to heal children and help them to overcome any difficulties, while Thatonatsi aspires to be a gynecologist, specializing in neonatology, as she is fascinated by the miracle of life.

“On arriving I felt the solidarity of the Cuban people and I loved that. Teachers and workers of the ELAM look after us very well. Those whom I have met outside of the school have given me the impression that they enjoy making friends and sharing their space. They seem open and strike up a conversation with ease.”Darions Wani Alfred Kilopas, aged 19 from South Sudan, explained to Granma International that in his home city of Juba, it is very expensive to study medicine, costing over $20,000 dollars per year, an amount his parents can not afford as they have 10 children to care for.

Abdoulaye Gounoli Godi, from Chad, spoke of the lack of health professionals in Africa. “I decided to become a doctor because I was once playing football and a fight ensued in which one of the players was injured with a sharp knife. On arriving at the nearest health center, there was no emergency service. We had to take him to the center of the capital and he died while being transported. At the hospital we were informed that his death was due to not receiving immediate medical assistance.”

He heard of the scholarship to Cuba during a visit by the president to his high school, and quickly did all the paperwork despite knowing very little about the Caribbean island, apart from personal comments by his teachers regarding Fidel Castro and Ernesto Guevara.

“The Cuban professors teach us with love, they provide us with all their knowledge, if we have any difficulties they even stay after working hours or invite you to their homes to go over topics. I would like to work in neurology, but I qualified to be a teaching assistant in pathology and I am now helping my compañeros who haven’t passed this subject and are preparing for an exam at the end of August.”

All agreed that they felt much affection for Cubans, having been made to feel welcome since their arrival, and described the island as representing hope for the world.