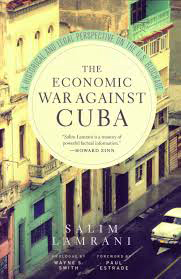 Salim Lamrani provides a concise look at the US blockade imposed on Cuba since 1960. His book gives an overview of how policy towards Cuba has changed since the revolution of 1959 as the US has become more determined to destroy the revolution. The blockade has been used not only to strangle Cuba’s economy but also to stop essential food and medicines reaching the island. Fidel Castro described the blockade as ‘attempted genocide’.

Lamrani begins by explaining how the blockade of Cuba goes far beyond sanctions placed on any other country, and why it is completely unjustified and cruel. He stresses how the blockade affects the daily lives of all Cubans in terms of the supplies they cannot import, and foreign individuals and businesses that are fiercely pursued by US institutions for trading with Cuba. The US Government Accountability Office Report states that: ‘After 2001, the Office of Foreign Assets Control opened more investigations and imposed more penalties for embargo violations, such as buying Cuban cigars, than for violations of other sanctions, such as those imposed on Iran’ (p65).

Looking at the first years of the revolution, from 1959 to 1962, Lamrani discusses the transformation of the Cuban economy away from dependence on sugar exports to the US, a process which had effectively enslaved the nation, towards the diversification of the economy necessary to survive the US economic attack. He then summarises how each presidential administration has dealt with Cuba, from Eisenhower to Obama.

From the outset, the US has made no secret of its plans to destroy the Cuban Revolution. In 1960 Eisenhower cancelled the US sugar quota, stopped the sale of energy and arms to the island, and established campaigns of terrorism to overthrow Fidel Castro. In 1961 Eisenhower broke off all ties with Havana. Kennedy used the Trading with the Enemy Act (1917) to make the blockade unilateral, in violation of international law. From 1962 all nations trading with Cuba were excluded from USAID programmes and all ships that docked at Cuban ports were blacklisted. Lamrani notes the success of these tactics in stopping trade between Cuba and other capitalist countries, almost paralysing Cuban industry.

However, he also shows the determination and ingenuity of the Cuban people to resist these measures. ‘Eisenhower abolished the current year’s Cuban sugar import quota of 700,000 tons. It should be noted that sugar counted for 80 per cent of all exports to the United States, Cuba’s natural and historical market, and employed almost 25 per cent of Cuba’s population. In response, Havana passed Act 861 on July 6, 1960, which authorised the nationalisation of all US properties [in Cuba]’ (p24). Throughout the 1960s and 1970s the extra-territorial character of the sanctions increased. With powerful evidence, Lamrani shows the cruel, relentless and criminal nature of US policy.

There was brief respite for Cuba under the presidency of Jimmy Carter 1977-1981. In a new political landscape following the near-impeachment of Nixon, Cuba enjoyed a period of increased openness with the US. Throughout the 1980s, US politics shifted further right, and, unsurprisingly, policy towards Cuba became more aggressive. This culminated in the Torricelli Act (1992) which, in light of the collapse of the Soviet bloc, Cuba’s main trading partner, was an attempt to crush the revolution no matter what the cost to the island. Lamrani shows the uncompromising nature of the ideological battle that the blockade is part of.

The Helms-Burton Act (1996) was another demonstration of US determination to eliminate the Cuban example. Lamrani details the extra-territorial character of this Act, pointing out how it flouts both US and international law. Lamrani’s use of facts, quotes and statistics is powerful, flows well and is easy to understand. For example: ‘Thus Title III, more specifically Section 302, allowed US courts to prosecute foreign companies that took over nationalised properties that had previously belonged to persons who, at the time of nationalisation, had held Cuban nationality. These persons had in fact chosen exile in the United States and had acquired citizenship after the expropriation process. However, US law is clear that prosecution in US courts is only possible if a person aggrieved by the nationalisation process was a US citizen at the time of the expropriation ... The Helms-Burton Act was not only flouting US law but violated international law as well’ (p34).

The section on the Bush administration’s 2004 Commission for Assistance of a Free Cuba shows how the blockade has torn apart families for half a century. In 2004 the definition of family was narrowed, so US citizens with cousins, uncles, aunts and grandparents in Cuba could not longer visit them.

Lamrani then exposes the hypocritical nature of the supposedly ‘liberal’ Obama administration. When canvassing for the 2008 elections, Obama promised more openness with Havana. However, despite removing some of the Bush-era restrictions on family relations, and expanding the range of US products that can be sold to Cuba (for cash and up front), most of the blockade is intact. Lamrani expertly rips apart US policy with concise facts, logical arguments and conclusions: ‘During his presidential campaign, Obama denounced the policy of his predecessor with respect to Cuba ... Nevertheless, the Democratic administration has not returned to the status quo in force under President Clinton. For example, on September 14, 2009, President Obama decided to extend by one year the Trading with the Enemy Act of 1917, legislation that established the economic sanctions against Cuba. In doing so, he has followed the lead of all US presidents since 1962’ (pp43-44).

The section about the blockade’s impact on health care is a great indictment of US policy. Lamrani shows how the patents owned by US pharmaceutical companies are used to keep life-saving medicines out of Cuba: ‘Indeed, nearly 80 per cent of the patents granted in the medical sector are issued to US pharmaceutical multinationals and their subsidiaries, which gives them a virtual monopoly. Cuba cannot get access to these medications due to restrictions imposed by the government of the United States’ (p46).

Lamrani details how this affects Cuba: ‘For example, Cuban ophthalmological services are not able to use transpupillary thermotherapy in the treatment of children suffering from cancer of the retina. Cuba is prevented from acquiring the surgical microscopes and other equipment needed for its treatment because these products are sold exclusively by the US company Iris Medical Instruments’ (p46).

Lamrani provides many examples of the extra-territorial aspects of the blockade, for example the case of the Swiss bank UBS being fined $100m for trading US dollars with Cuba (Cuba is forbidden to trade in US dollars, the world trade currency). He also tells how in 2006 Japanese company Nikon attempted to award a 13-year-old Cuban boy with a Nikon camera as part of the United Nations Environment Programme’s international children’s painting competition. The camera could not be awarded because it contained parts made in the US.

This book serves as a useful reference on the US blockade imposed on Cuba. Its strength lies in Lamrani’s ability to communicate a lot of information in a way that is engaging and accessible for readers with different levels of previous knowledge. This book could have been improved if Lamrani had discussed the issue of socialism; the alternative it represents and why US imperialism is so threatened by it. However, as a guide to the punitive blockade, despite which Cuba has thrived, this book covers every point with great accuracy, and it makes a great read for anyone interested in Cuba.