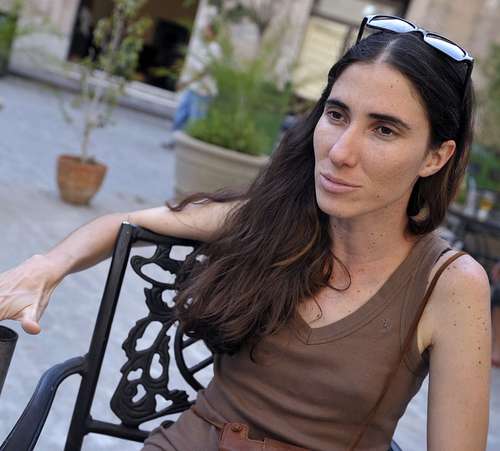 Yoani Sánchez, a famous blogger in Havana, Cuba, is a character peculiar to the world of Cuban dissidents. No opponent has ever benefited from such massive media exposure and international recognition of such a scale in so little time. After emigrating to Switzerland in 2002, she returned to Cuba two years later, in 2004. In 2007, she joined the world of the Cuban opposition and created her blog ‘Generation Y’ becoming a staunch critic of the government. Never has any dissident in Cuba, or perhaps in the world, achieved so many international awards in such a short time, and all with a particular characteristic: Yoani Sánchez has been provided with enough money to live quietly in Cuba for the rest of her life. Indeed, the blogger has been paid up to 250 000 euros in total, or an amount equivalent to more than 20 years of the minimum wage in a country like France, the fifth world power. The minimum monthly wage in Cuba is 420 pesos, or 18 dollars or 14 euros, so that Yoani Sánchez has won the equivalent of 1,488 years of Cuban minimum wage for her opposition activities.

Yoani Sánchez maintains a close relationship with U.S. diplomacy in Cuba, as indicated by a cable, classified "secret" because of its sensitive content, emanating from the U.S. Interests Section (USIS). Michael Parmly, the former chief of the USIS in Havana, who met regularly with Yoani Sánchez during his diplomatic residence, as indicated by USIS confidential documents, stated his concern regarding the publication of the American diplomatic cables by Wikileaks: "It would bother me if numerous conversations with Yoani Sánchez were published. She could pay the price for life". The question that immediately comes to mind is this: why would Yoani Sánchez be in danger if the discussions, as stated, respected the framework of the law?

In 2009, the Western press published a strongly mediatised interview that President Barack Obama had given to Yoani Sánchez. Sánchez also reported that she had sent a similar questionnaire to Cuban President Raul Castro and that she had not received a response. However, the confidential documents of the USIS, published by Wikileaks, contradict those statements. It was discovered that it was actually a member of the U.S. diplomatic mission in Havana who was responsible for writing the replies to Yoani Sánchez and President Obama. More seriously, Wikileaks revealed that Sánchez, contrary to her assertions, never sent a questionnaire to Raul Castro. The head of the USIS, Jonathan D. Farrar, confirmed this fact in an email sent to the State Department.

Besides the website ‘Generation Y’ Yoani Sánchez also has a Twitter account and claims more than 214 thousand followers (up until 12 February 2012). Only 32 of them reside in Cuba. Yoani also follows more than 80,000 people. In her profile, Sánchez tweeted "Blogger, I live in Havana and I count my reality into chunks of 140 characters. Tweeted via SMS without web access." However, this is hardly credible, it is absolutely impossible to follow over 80 thousand people through just SMS or from a weekly connection from a hotel. Daily access to the network is essential for this.

The site www.followerwonk.com analyses the profile of the followers of any member of the Twitter community. The case study of Yoani Sánchez is revealing in several respects. An analysis of data from the Twitter account of Cuban blogger, conducted through the site, from 2010 reveals an impressive account activity from Yoani Sánchez. From June 2010, Sanchez registered over 200 different Twitter accounts each day, with peaks that could reach 700 accounts in 24 hours. It is impossible to subscribe to so many accounts in so little time which suggests that these peaks have been generated by a computer program.

Similarly, the website found that about 50,000 followers of Sanchez are from ghost or inactive accounts, creating the illusion that the Cuban blogger enjoys great popularity in social networks.  Among the ghosts that Yoani Sánchez still counts on Twitter, 3,363 do not have any followers and 2,897 still only have one or two accounts following them.

Creating a fictitious popularity on Twitter is impossible without regular access to the Internet. According to research conducted by the newspaper La Jornada, titled ‘The Ciberacarreo, the new strategy of politicians on Twitter,’ for transactions involving Mexican presidential candidates, many companies in the U.S., Asia and Latin America offer to create fictitious twitter popularity at high prices. ‘For a fictitious army of 25 thousand followers, the newspaper will pay up to $ 2,000, and 500 profiles managed by 50 people can cost between $12 – 15, 000 dollars.’

Yoani Sánchez issues an average of 9.3 messages per day. In 2011, the blogger posted an average of 400 messages per month. The price of a message in Cuba is one convertible peso (CUC), representing a total of 400 CUC per month. The minimum wage in Cuba is 420 pesos, or about 16 CUC. Each month Yoani Sánchez spends the equivalent of two years Cuban minimum wage sending twitter messages. This equates to about 25 000 euros a month on Twitter, i.e. 300 000 euros annually. The question inevitably arises… who funds this activity?

How can Yoani Sánchez follow more than 80 000 accounts without permanent access to the internet? How could she subscribe to over different accounts of 200 a day on average since June 2010, with peaks over 700 bills? How many people actually follow the activities of the Cuban opposition in the social network? Who funds the creation of fake accounts? For what purpose? What are the interests that lie behind the figure of Yoani Sánchez?