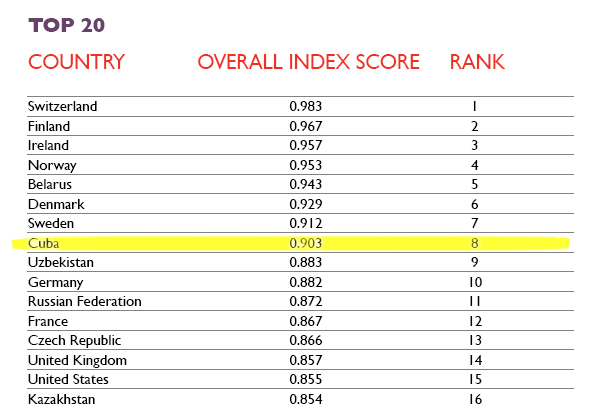 It should not come as a surprise that Cuba has received this ranking, as - contrary to many imperialist countries – expanding and improving healthcare has been a major focus since the revolution. The infant mortality rate in Cuba is 4.5 deaths per 1000, a figure which has plummeted from 60 per 1000 in 1959. Throughout the ‘special period’ when Cuba’s economy suffered following the collapse of the Soviet Union, the advances in healthcare were astounding, with the number of doctors increasing by 76% between 1990 and 2003, and the number of maternity homes rising by 86% in the same period. This is alongside a huge programme of medical solidarity brigades, with 17,697 Cuban doctors working abroad in 75 countries which need them most. It is amazing to think that Cuban medical professionals will have also had a huge effect on the ranking of countries such as Guatemala, Namibia, and Ghana.

The absence of any comment of Cuba’s ranking in the mainstream press coverage should come as no surprise either. This incredible performance despite the continued U.S. blockade could only be possible with a socialist system, planning the economy based on the needs of the people rather than the anarchy of the capitalist market. For the press to acknowledge Cuba’s position would require acknowledgement of this central – and dangerous - fact.

The UK’s ranking in 14th place reflects a society deeply divided by class differences and inequality, with the availability of healthcare for those who cannot afford private services under renewed attack by the government. This assault on NHS which was planned and started under the last Labour government is continuing under the Con-Dem coalition with the Health and Social Care Bill. NHS trusts have already cut training budgets by £25 million this year, and £20 billion worth of ‘efficiency’ savings are planned by 2014-5. It is clear that as the crisis of capitalism deepens, adequate healthcare is low on the agenda for the British ruling class.

Cuba’s ranking in this new study is yet another vindication of the ability of their socialist system to meet the needs of the people, and to do this without relying on plundering wealth from other nations around the world. The future progress of humanity cannot lie with ‘efficiency’ savings and privatisation of healthcare – it can only lie with following the example of socialist Cuba.

Read the full report with the rankings of other countries here: