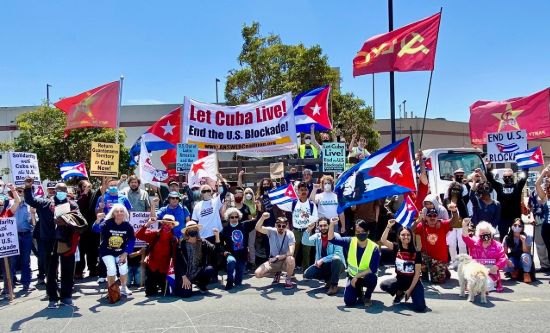 US President Joe Biden made it an election promise to ‘promptly reverse the failed Trump policies that have inflicted harm on the Cuban people and done nothing to advance democracy and human rights’ (Americas Quarterly, 4 March 2021). But instead of reversing the 243 new sanctions inflicted on Cuba by the Trump administration, Biden’s government has:

On 30 July, the US Office of Foreign Assets Control announced new sanctions under the Global Magnitsky Human Rights Accountability Act. The sanctions target: Cuba’s National Revolutionary Police; Oscar Callejas Valcarce, the director of the police; and Eddy Sierra Arias, the police’s deputy director. This largely symbolic act was designed to give credence to accusations that Cuba’s police had ‘disappeared’ or even murdered protesters involved in the 11 July anti-government demonstrations, propaganda which has been debunked by Cuban media. Those demonstrations occurred just ten days after USAID was granted $20 million for ‘democracy projects’ in Cuba, available from 1 October, including millions of dollars for Cuban dissidents. On 7 September, Biden signed a memorandum to renew provisions under the Trading With the Enemy Act of 1917, which restricts any and all trade between the US and Cuba until at least September 2022.

Seeing the effect of the protests in July, which were accompanied by a coordinated social media campaign that utilised bots, fake accounts and specious hashtags, such as #SOSCuba which was launched by a company in Florida, Biden has instructed his ‘government experts’ (hackers) to draw up plans for ‘expanding uncensored internet access’ for Cubans – ie to create a pirate internet infrastructure which is outside the regulation of the Cuban state. This is a gross violation of sovereignty which would never be tolerated if another country did it to the US. The Democrat-controlled Senate approved an amendment to Biden’s $3.5 trillion budget package which included financing for this proposed cyberwarfare campaign against Cuba. The arch-reactionary Senator Marco Rubio was delighted: ‘Today, my colleagues sent a clear, bipartisan message that the US is committed to getting uncensored and unrestricted internet access to the people of Cuba’.

This has nothing to do with removing restrictions on internet access: for decades, US sanctions have prevented Cuba from accessing the broadband cables that pass close to the island. So how can the US deploy pirate internet in Cuba? In a plot that would make a Bond villain smile, the right-wing Miami Cuban Congresswoman María Elvira Salazar introduced the ‘American Freedom and Internet Access Act’ which, if passed, would require the US Air Force to implement ‘Operation Starfall’. This would see the development of ‘a strategic plan to deploy stratospheric balloons, aerostats or satellite technology capable of rapidly delivering wireless internet anywhere on the planet’. Such technology was originally devised to provide disaster relief – but US imperialists can always be counted on to turn such developments against countries that challenge US hegemony.

Following an earthquake that devastated Haiti on 15 August, within days Cuba sent medical brigades to treat people in need. As thousands have since fled Haiti, they have been met by US border guards on horseback, using whips to drive them back across the Texan border, in scenes which resembled slavery in the antebellum South. On 23 September, Biden announced that his administration is now inviting bids from private companies to run the re-opened Migrant Operations Centre in illegally occupied Guantanamo Bay, Cuba, in which to detain up to 400 migrants at a time – the Centre was used to imprison 34,000 Haitians between 1991-2017. The contrast could never be clearer: imperialism is barbarity, socialism is humanity.