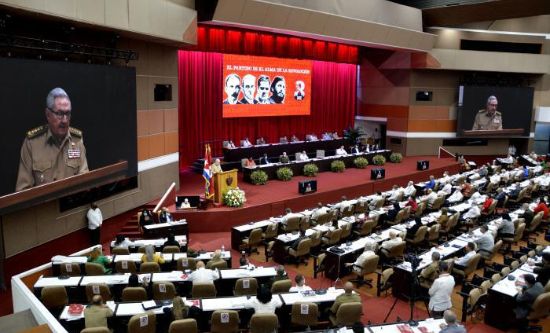 The Revolutionary Communist Group in Britain and its campaign in solidarity with socialist Cuba, Rock around the Blockade, sends congratulations and solidarity greetings on the completion of the 8th Congress of the Communist Party of Cuba (PCC) which took place in Havana between 16 and 19 April, on the 60th anniversary of the defeat of the US-backed invasion by Cuban exiles at the Bay of Pigs by the revolutionary government in 1961. We salute comrade Raul Castro Ruz, who stood down as General Secretary of the CPP, Miguel Diaz-Canel, President of Cuba, who took up the role, and the new leadership of the PCC for their extraordinary courage and determination. We send solidarity to the nearly 700,000 members of the PCC, the organised vanguard of the Cuban working masses, who were represented at the 8th Congress by 300 delegates due to Covid-19 restrictions. We applaud their hard work in addressing the challenges and tasks of building socialism in Cuba today under global difficult circumstances, exacerbated by the pandemic and the criminal tightening of the US blockade.

As people across the world have stepped up a campaign of coordinated solidarity events to call for an end to the blockade of Cuba – with monthly caravans and solidarity protests organised in North America and Europe, a campaign in which the RCG is participating actively – we do not only call for ‘Hands off Cuba’ as an act of sympathy. We look to the Cuban socialist revolution and its leadership by the PCC as proof of how to change the world: to overthrow capitalism and build revolutionary workers’ power.

The 8th Congress consolidated the work of passing on political leadership to a new generation. Miguel Díaz Canel, president of the Council of State, will now take on the role of PCC First Secretary. Renewal of the party cadres has increased steadily in recent years, a reversal of the downward trend since 2006: there have been 39,400 new members in the last year, a third of which came from the growing Union of Young Communists (UJC); and while the average age has risen, the 8th Congress set age limits on membership in the PCC Central Committee (60) and leadership positions within the Party (70). Rejecting proposals to remain in the leadership of the Party, Raul Castro made clear that he would remain in the PCC: ‘As long as I live, I will be ready with a foot in the stirrup to defend the country, the revolution and socialism.’

Other issues discussed included progress in the programme of economic reforms initiated from 2007 under the rubrics of Guidelines of the Economic and Social Policy of the Party and the Revolution and Conceptualization of the Cuban Economic and Social Model. These reforms are being implemented under the direction of the PCC with the mass democratic participation of the Cuban people, as a conscious response to economic problems while strengthening and deepening the revolution. Raul Castro affirmed that there are limits to these reforms: rejecting calls for the privatisation of key industries and some professions, and an end to the state monopoly on foreign trade, he made clear that members of the Communist Party are not swayed by such proposals. ‘Ownership by all the people of the fundamental means of production is the basis of the real power of workers.’

The RCG will continue contributing to the international solidarity movement, demanding an end to the illegal US blockade of Cuba. Victory to the Cuban people! Long live the PCC! Smash the blockade!