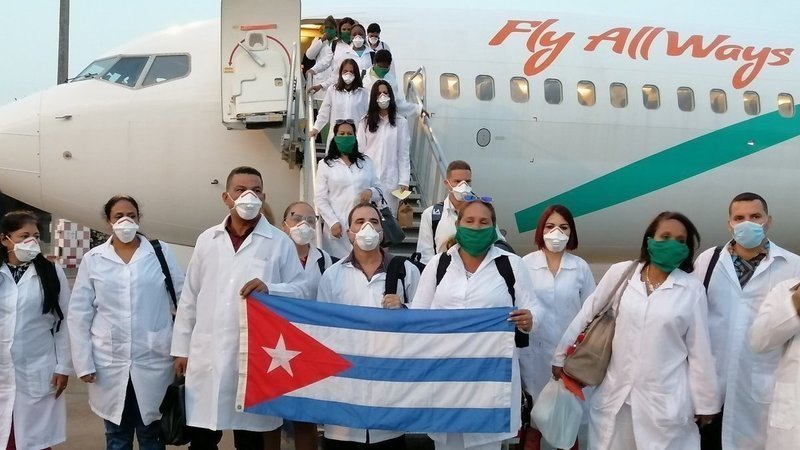 Learn from socialist Cuba’s approach to the COVID-19 pandemic.

Given the abject failure of the British government to respond adequately to the SARS-CoV2 pandemic, leading to thousands of unnecessary deaths, including over 300 frontline NHS and care workers, we call on the British government to actively pursue collaboration with the Republic of Cuba on containing the coronavirus and treating COVID-19 patients. This requires it to actively oppose the criminal United States blockade which remains in place after six decades.

Since the Revolution of 1959, Cuban socialism has placed human welfare, not profit at the centre of development. The need for this approach is made starkly clear in the context of this pandemic. Socialist Cuba reacted quickly to the disease, establishing a prevention and control plan in January to prepare medical facilities and staff. By extensive testing, contract tracing, quarantining, closing its borders and conducting door to door health checks since its first case on 11 March, Cuban authorities have contained the virus. By 24 May, a Cuban population of 11.2 million had reported 82 deaths; 173 confirmed cases per million people, compared to nearly 3,907 cases per million in Britain. Not one healthcare worker had died. Cuba’s exemplary response is based on five features.

First, its single, universal, free public healthcare system which seeks prevention over cure, with a network of family doctors responsible for community health who live among their patients. Cuba has the most doctors per capita in the world. Second, Cuba’s biopharma industry which produces nearly 70% of the medicines consumed domestically and exports to 50 countries. Cuba’s COVID-19 treatment protocol lists 22 medicines, most produced domestically. Particular efficacy is being demonstrated by Cuba’s Interferon Alfa 2b Human Recombinant (marketed as Heberon), an anti-viral drug produced in Cuba since 1986 and in China since 2003 through a Cuban-Chinese joint venture, now being administered to COVID-19 patients in countries worldwide. Heberon is not licensed in the UK. Every Cuban is being given a homeopathic medicine to strengthen their immune system. Two vaccines to stimulate the immune system are under evaluation and four preventative vaccines for COVID-19 are being developed.

Third, the island’s experience in civil defence and disaster risk reduction, usually in response to climate-related and natural disasters. Its internationally applauded capacity to mobilise national resources to protect human life is facilitated by a network of grassroots organisations which facilitate communication and community action. Fourth, the island’s experience in infectious disease controls. For decades, Cuba has sent healthcare professionals to countries which have infectious diseases eradicated on the island and has invited tens of thousands of foreigners from those countries to study in Cuba. Healthcare authorities have well-developed procedures for quarantining those (re)entering the island. Fifth, providing international medical assistance which prior to the pandemic saw 28,000 medics working in 59 countries. Since March, over 2,300 healthcare professionals from Cuba’s Henry Reeve medical brigades have gone to combat COVID-19 in 24 countries, including Italy. These specialists are experienced in disaster response and in combating epidemiological diseases, including Ebola in West Africa.

To save lives, the British government must learn from Cuba’s response to COVID-19 and finally activate domestic legislation which counteracts US sanctions so that normal relations can be pursued with Cuba.