No to imperialist aggression against Venezuela and Cuba 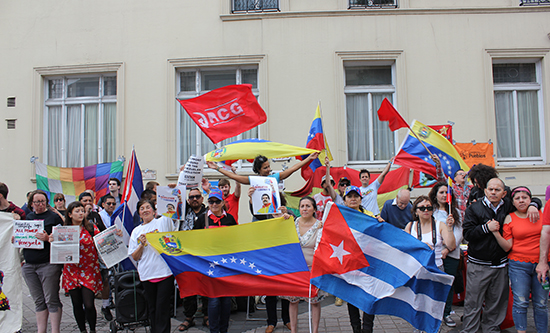 Rock Around The Blockade, campaign of the Revolutionary Communist Group, condemns the escalation of US aggression against Venezuela and Cuba in the midst of the Covid-19 pandemic. The Trump administration's deployment of navy destroyers to patrol the Caribbean near Venezuela on 1 April is a declaration of war and the latest move in protracted efforts to overthrow the Bolivarian Revolution. The US military deployment is part of a wider manoeuvre planned for the whole region involving aircraft and ground units, adding to deployments to Guyana and a major new military pact with Brazil, Venezuela's hostile neighbours. These actions will amount to the largest US military deployment in the region in the last 30 years.

We reject the heinous accusations that Venezuela is a narco-state and the vile bounty Trump has placed on President Nicolas Maduro's head. Evidence from the United States' own Department of Defence concludes that Venezuela is not a prime transit country for drugs, with the majority of US supply originating  from Colombia, channelled via the pacific to other US allies in central America before being smuggled north across the US border. Furthermore, Trump's reference to 'malign actors' seeking to exploit the coronavirus situation as a further justification is ludicrous. It is the US that is now the epicentre of the pandemic thanks to a lax response in which the Trump administration prioritised private interests over social health. It is the US that is the 'malign actor' exploiting the pandemic for its own gain by ramping up sanctions and hostilities on countries across the globe. 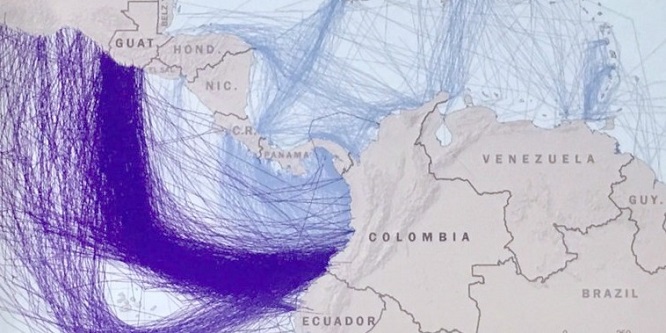 A map produced by the US Southern Command shows the main drug-smuggling routes in Latin America connecting Colombia and Ecuador with Guatemala and Mexico via the Pacific Ocean.

Crushing US sanctions are estimated to have cost Venezuela $120 billion since 2014. Human rights expert Alfred de Zayas, who as UN rapporteur visited Venezuela in 2017, estimates these measures have killed over 100,000 as imports of key medicines and healthcare equipment have been blocked. Defying the UN call to suspend all sanctions in the battle against the virus, the US has blocked an emergency IMF loan being granted to Venezuela and has vowed to ramp up sanctions until President Nicolas Maduro resigns and Venezuela terminates all agreements with Russia and Cuba. This would require the total surrender of the Bolivarian Revolution and the social and political gains that have been won by the working and impoverished classes in the fight for socialism for over the last 20 years.  Trump is weaponising sanctions in the covid-19 pandemic in the hope of crushing movements for socialism.

The PSUV government headed by Maduro has made clear that they will meet aggression full on. In a letter to the US people, Maduro wrote 'I wholeheartedly ask you not to allow your country to be dragged once again into another unending conflict, another Vietnam, another Iraq, but this time, closer to home.'

The Trump administration has also been busy smearing outstanding contribution of socialist Cuba in fighting the pandemic, peddling lies about 'slave doctors' and pressuring other countries to reject practical assistance from Cuban medical teams working in 60 countries. Cuba has sent 14 brigades of medical specialists abroad specifically to combat the Covid-19 pandemic. While the US offers vast amounts of money for exclusive access in the scramble to produce a vaccine, Cuba's life-saving drug Interferon Alpha 2B is already being distributed and administrated to Covid-19 patients. Cuba received the stricken British cruise ship MS Braemar and treated its passengers. Meanwhile, US sanctions have blocked the delivery of Chinese donations of testing kits, masks and ventilators to the island. In the face of the US blockade which costs Cuba some $12 million a day, socialist internationalism is prevailing against US imperialist bullying. We must join the international demand to end the illegal US blockade of Cuba. Rock Around The Blockade and the Revolutionary Communist Group demand:

Take action! Demand an end to the extra-territorial application of the US blockade of Cuba in Britain. Demand an end to British support for US sanctions on Venezuela. Release Venezuela's gold with-held in the Bank of England. Complain to:

Dominic Raab – Secretary of State for Foreign and Commonwealth Affairs