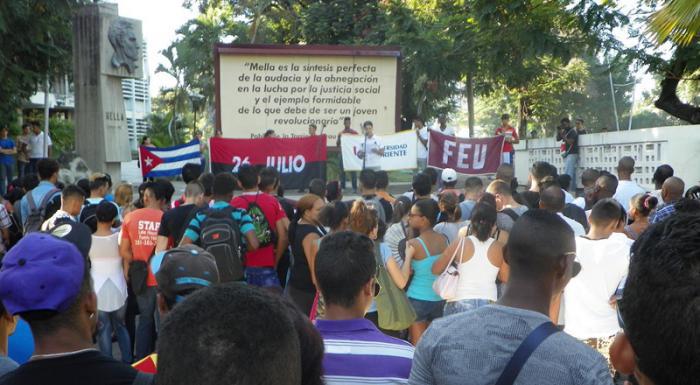 “The members of the Federation of University Students (FEU) are not asleep, nor passive, and much less remain with their arms crossed in the face of the interventionist and hostile plans of the U.S. government,” warned Jennifer Bello Martínez, FEU national president, speaking on September 27, in the province of Ciego de Ávila.

During a press conference, Bello Martínez, a member of the Council of State, denounced subversive plans financed by the U.S. on behalf of the organization's over 130,000 members. She also condemned the scholarship program offered by the World Learning organization, which targets Cuban youth.

In this sense, the FEU national president noted that initial protests were held at the universities of Havana and Computer Sciences, and the José Antonio Echeverría Higher Polytechnic Institute (Cujae); and are set to continue across all the country's student brigades, faculties and universities.

She emphasized that higher education students are offended, as "We don’t need anyone to come and tell us what the project for the country we want in the future should be, and even less so if the proposal comes from the North, where they have always tried to instil us with capitalist culture.

"For this reason we shall explain to you (Cuban youth) in detail," she stated "the true aims of these scholarship programs, which form part of modus operandi chapters and modules which are repeated time and again, the very same that they (the U.S. government) have used to overthrow governments and sow division among the people." noted Bello Martínez.

She went on to highlight that the FEU will also undertake activities with youth linked to the non-state sector to explain to them the essence of these programs and true intentions of the U.S. government, which is showing a marked interest in this section of the island's population, who they have mistakenly termed entrepreneurs.

The first day of protests in Ciego de Ávila took place at the Raúl Corrales pedagogical school, while activities will continue throughout the week at the José Assef Yara University of Medical Sciences, and Máximo Gómez Báez University and its associated campuses.

Bello Martínez noted that over the coming days, Cuban youth and university students are inundating social networks to express their rejection of World Learning, an organization with non-educational aims, despite what it claims.