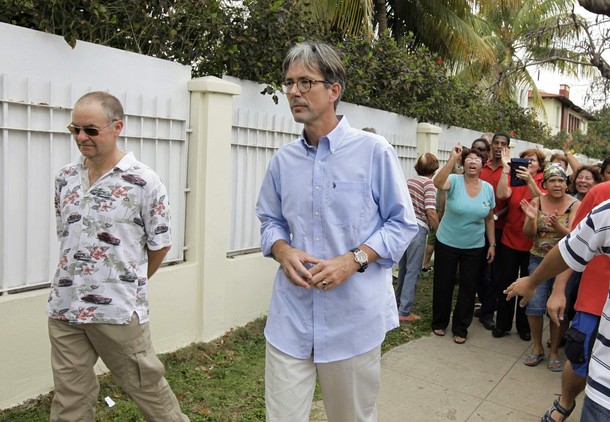 The Ladies in White are the families of 75 Cubans found guilty in 2003 of violating the country’s constitution by accepting payment from US-based and US government institutions for promoting their objective of destabilising and overthrowing the Cuban Revolution. Like every country in the world, Cuba has the right to defend itself against subversion and terrorism, and the right to imprison those proven guilty of these crimes. Acting as a propagandist of British government foreign policy, the BBC seems to think that only those countries that comply with the dictates of British and U S imperialism have a right to defend themselves. For 50 years Cuba has fought to defend its independence from US imperialism’s attempts to return Cuba to the status of neo-colony. To demonise Cuba, the media ignore its immense achievements in health, education, culture, science and sustainable development, to focuses on ‘human rights’ by which it means the ‘freedom’ of capital. It ignores the violation of human rights inflicted by the US’s criminal blockade, its sponsorship of terrorism and constant interference in domestic affairs, all supported by the European Union.

In the 1980s, the BBC did not hail the families of Irish Hunger Strikers as human rights activists. It censored coverage of the worldwide movement built in their support. For 35 years the mothers and grandmothers of 30,000 young people tortured, murdered and ‘disappeared’ by the US-backed dictatorship demonstrated at the Plaza de Mayo in Buenos Aires, Argentina. Where was the BBC? The BBC do not report on the international campaign to demand freedom for the Cuban 5 – five Cubans incarcerated for over ten years in the US for gathering information about acts of terrorism being planned by extremists in Miami. Even when the BBC does report on hunger strikes taking place throughout Britain’s racist immigration detention centres – a recent hunger strike at Yarlswood Detention Centre involved over 50 women - it does not link the protests to the issue of human rights.

The British media has found the resources to give significant coverage to the hunger strike and death of a single man in Cuba, Orlando Zapata Tamayo, who they have honoured with the label ‘political prisoner’. In reality he was not goaled for ‘dissident’ activity, but for petty crimes, included attacking someone with a machete. The world corporate media ignore or skip over this rather inconvenient truth to eulogise Zapata as a martyr for the cause of human rights. Among the rights which Zapata himself was demanding were a television, telephone and a cooker – in his cell. Thus, even while Zapata’s mother thanked Cuban doctors for the care they gave him, Zapata became a pawn in their propaganda war against Cuban socialism.

We condemn the hypocrisy of those who preserve today’s world of exploitation and oppression. Cuba is fighting for a new world of justice, peace and prosperity. The success of Cuban socialism has exposed the fundamental corruption and exploitation of capitalist society. The Cuban Revolution has shown the poor majority of the world population that fundamental change is not only necessary but that it is possible. We must contribute to this international movement, starting here in Britain: exposing media lies and defending Cuban socialism; exposing fraudulent elections and defending our rights to work, housing, health, education, culture and sport – human rights universally enjoyed by everyone in Cuba.
Dominic O’Hara

Download this letter and send it to Chris Bryant, Minister of State for Europe and Parliamentary Under-Secretary of State for Foreign Affairs at the Foreign and Commonwealth Office, to demand to know why British diplomats have been supporting the demonstrations of the Ladies in White. Quick! Email or post it before 5 May!