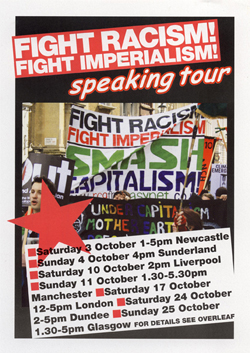 In the second session David Yaffe explained the economic crisis and gave a detailed factual analysis of the parasitic nature of capitalism. He addressed the subjects of debt and British foreign investment and exposed the nonsensical denial of imperialism which emanates from large sections of the British Trotskyist left. He made it clear that the current crisis and the attacks on public services, such as health and education, can only be challenged by a new militant movement which is not tied to the ‘left’ of the Labour Party and which puts the interests of the whole working class above defending the narrow privilege of the labour aristocracy, which has been bribed with crumbs of the wealth plundered from the oppressed of the world.

A Bolivian member of the audience spoke from the floor about his experience with the Socialist Worker Party (SWP) and their bankrupt position on left wing movements in Bolivia. It was reported that he and other Bolivians wanted to hold meetings and discussions surrounding the ongoing Bolivian water wars but were denied by national executive member Alex Callinicos, who claimed Bolivia "was not important". It was stated that after this experience they left the SWP to form the Bolivian Solidarity Campaign. The majority of the left in Britain ignores the vibrant revolutionary developments in Latin America and fails to highlight the reality of years of imperialist plunder and oppression the people have been forced to face. Other contributions to the discussion focussed on how to provide alternative revolutionary education for young people in imperialist Britain.

The meeting ended with a call to support actions in support of asylum seekers and the struggle of the Palestinian people, and to participate in further in-depth educational discussion around revolutionary theory and practice.