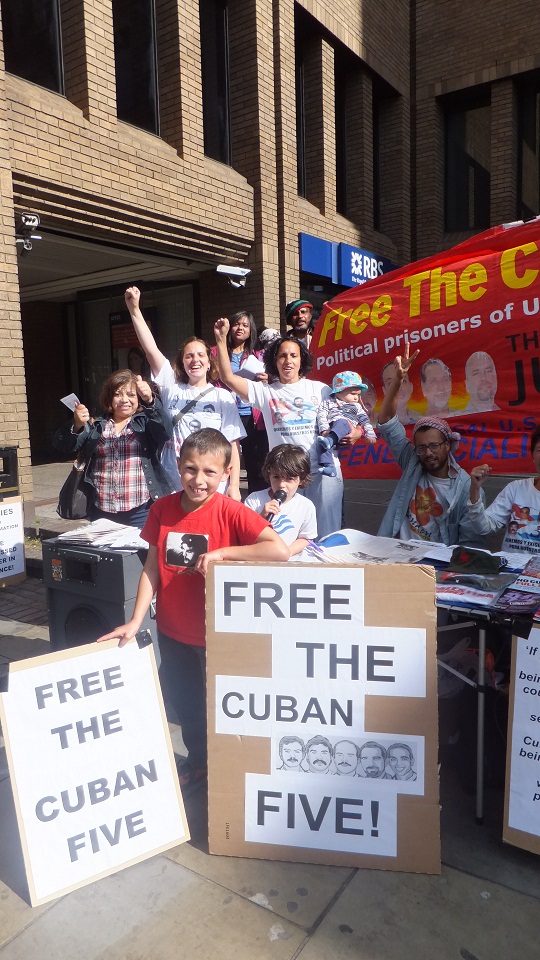 On Saturday 15 September, Rock around the Blockade activists took to streets in London, Manchester, Newcastle and Glasgow to mark 14 years of unjust incarceration of the Cuban 5 in the US and to demand their release.

Rallies in each city publicised the case of these five anti-terrorist heroes who are being held as political prisoners for simply trying to defend Cuba from terrorist attacks that were being planned from within the US.

Speeches at the rallies highlighted the example of Cuba’s Revolution, which shows that there is an alternative to the poverty, war and environmental destruction of today’s imperialist-dominated world. The persecution of the Five is just part of a continual campaign to destroy the revolution and wipe out this alternative.

One of the Cuban Five, Fernando Gonzalez had written to Rock around the Blockade from gaol in the US to support the day of action. His words were read out at the rallies: ‘As you get together today to show your commitment to the struggle for our release from prison, we express our gratitude to all of you as well as our decision to withstand any circumstances and remain in the fight for justice for as long as it takes to achieve it.’

The Committee to Free the Cuban 5 in the US and the Five’s legal defence team have proved that Government money was paid to journalists through the US state-funded Radio Marti, to create a hostile atmosphere in Miami leading up to the Five’s legal trial there. Between the start of the trial in November 2000 and June 2001 when they were found guilty, the Miami Herald alone published 1,111 articles on the Five, an average of more than five a day, saturating the press with lies and manipulations.

As Kenia Serrano from the Cuban Institute for Friendship between the Peoples (ICAP) in Cuba has said, getting the word out about the Five is what will help to free them because legal avenues are almost exhausted. This means taking the campaign for the Five onto the streets to break the media silence, which is part of the imperialist campaign against Cuba and the Cuban 5.