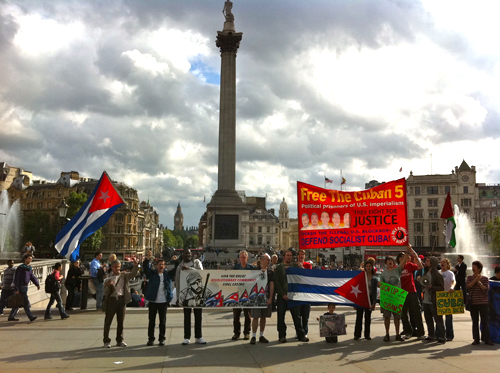 In Trafalgar Square, central London, Rock Around the Blockade members worked with representatives from Hands Off Venezuela, The Free Mumia Abu Jamal Campaign (Free Mumia), George Jackson Socialist League and the Revolutionary Communist Group (RCG). They held a lively protest with constant speeches and statements, highlighting the hypocrisy of US double standards in its “War on Terrorism” and the countless victims and political prisoners of imperialism world wide. The case of the Cuban 5 and the gains of the Cuban revolution have been censored and slandered by the majority of capitalist television and radio networks globally. Therefore, it is vitally important that activists inside Imperialist Britain actively expose the long history of US and European imperialism in intervening in Cuban and Latin American affairs, directly sponsoring terrorist acts against Cuba whilst simultaneously harbouring right-wing terror masterminds such as Luis Posada Carriles and Orlando Bosch.

Rock Around the Blockade is a socialist organisation in solidarity with Cuba and Revolutionary movements throughout Latin America. It was founded in Britain in 1995 by members and supporters of the Revolutionary Communist Group and demands an end to the US blockade, for the release of the Cuban 5, against the imperialist occupation at Guantanamo Bay and for a boycott of Bacardi, supporter of the Miami Mafia. Since 1995 they have sent 11 solidarity brigades to Cuba, providing material aid to Cuban youth.
Today Rock Around the Blockade flew the Cuban and Palestinian flags proudly next to each other representing the solidarity of revolutionary Cuba with the oppressed nations of the world. At the end of the demonstration the protestors demonstrated together with Big Ben and Nelson’s column in the background with cries of “Free The Cuban 5” and “Viva Fidel and Raul”.
¡El pueblo unido, jamás será vencido!
The people united will never be defeated!

Anyone interested in arranging a screening in their local area, school, workplace or community centre, should contact RATB: This email address is being protected from spambots. You need JavaScript enabled to view it.. Copies of the film are availble on DVD from RATB for £5 on our stalls or £6 including postage and packaging if ordered over the phone (020 7837 1688) or the website, www.ratb.org.uk. 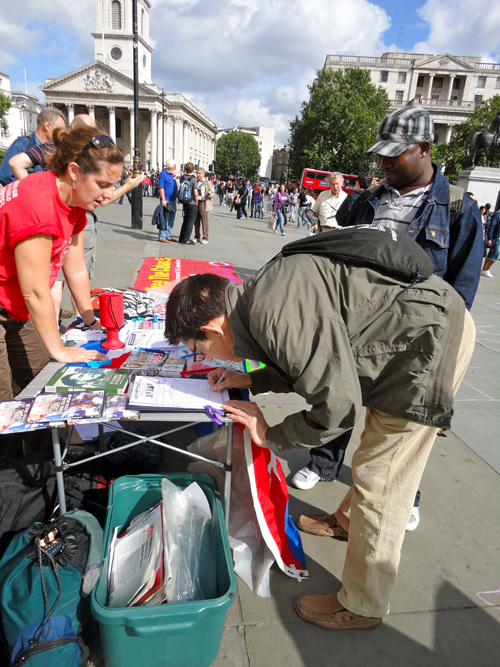