Smash the illegal US blockade of Cuba! 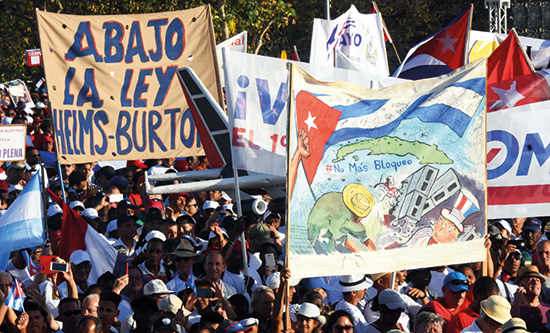 For 60 long years, the US has imposed blockade on the Cuban revolution. US imperialism has attempted to overthrow the Cuban revolution ever since its triumph in 1959. The US is trying to strangle the Cuban economy, bringing extraordinary hardships on ordinary Cubans. They are punishing the whole population of Cuba just so they can bring capitalism back into the island. Economic blockades are a type of warfare, that kill people and harm livelihoods all the same by denying them access to essential goods like food, medicines or building materials.

The Trump administration has strengthened the blockade while attacking Cuba’s allies in Latin America. Nevertheless, the people of Cuba are resilient and prefer the gains brought by socialism to anything imperialism can offer. They will not bow down to US imperialism, and so they will continue building socialism in Cuba and help millions of people around the world, based on the principle of internationalism. Join us on 17 October to show the US that many around the world stand with Cuba against imperialist aggression!