50 years of the US blockade of Cuba 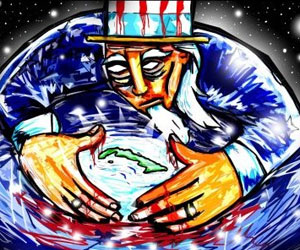 Tuesday 7 February 2012 marked the 50th anniversary of the implementation of the commercial, economic, and financial blockade of Cuba by the United States. Over the years it has cost Cuba’s economy over $236 Billion.The US began issuing sanctions and a partial blockade in October 1960 when the Cuban government began expropriating the U.S. corporations that had controlled most of Cuba's resources and over half of its sugar production before the revolution. The expropriations ensured Cuba’s resources would be produced for the Cuban people and not for the profits of US conglomerates. As expected, any threat to the US hegemony in a region that they view as their ‘backyard’ would be met with severe actions. The initial refusal of US-owned oil refineries in Cuban to refine imported soviet oil was followed by the Bay of Pigs (Playa Giron) invasion, the Cuban missile crisis and continuous terrorist actions committed against the Cuban people by the US. The latter included the introduction of dengue fever to Cuba in 1981 and numerous failed attempts on Fidel Castro’s life.

While the important facts that the blockade represents are shocking enough – any ship that docks in Cuba cannot enter a US port for 6 months, any foreign company that trades with Cuba is open to US retaliation- it is the fact that the US has for 50 years intended to starve the Cuban people for choosing to follow the path of socialism that is most striking.

The act of making a whole country and its citizen’s pay collectively for self determination is illegal under Article 2 of the UN Convention on the Prevention and Punishment of genocide. For 19 consecutive years the Blockade has been voted against by the vast majority of countries in the United Nations, only for the US to use its power of veto. This is another example of the desperation of a failing capitalist system, as the US government does its best to ensure people cannot see that a better world is possible. By not submitting to the parasitic imperialism of the US and thereby providing a better standard of living for the Cuban people as a whole, Cuban socialism is a beacon of hope for poor and oppressed people around the world. It has shown what is possible if society is arranged around meeting people’s needs and not for the profits of a minority, all whilst being 90 miles of the coast of the largest and most powerful imperialist country in the world.

Patrick Ulysees for Rock Around the Blockade