Day of action against the US blockade of Cuba!

On 12 December, activists from Rock around the Blockade (RATB), which campaigns in support of socialist Cuba, took to the streets in cities around Britain with Cuban flags and placards demanding the end to the punitive and illegal US blockade. In London, RATB was joined by Latin American activists and activists from other groups. Around the country, these actions condemned the Trump administration's recent economic sanctions against the Cuban people, and the most recent aggression being promoted by Miami Cuban exiles, both of which seek to create social upheaval on the island in the final weeks of the Trump administration.

A protest and open mic was organised in Trafalgar Square where the demonstrators vibrantly showed their support for the Cuban revolution, and their opposition to imperialism. The protest was supported by the Revolutionary Communist Group, Papua Militant International, the Communist League and a variety of supporters and activists from Latin American countries, including Colombia and Bolivia. Speakers gave accounts of the ways that Cuba is leading the world in medical internationalism in response to the Covid-19 pandemic, and informed the crowd that gathered about the effects of the illegal blockade on Cuba. Britain's complicity in the blockade of Cuba was highlighted.

The protesters chanted and marched to the Brazilian embassy close by where the role of Cuban doctors in supporting poor communities in Brazil was praised. The 'Mais medicos' (More Doctors) programme came under attack in 2018 from the reactionary presidency of Jair Bolsonaro, a key ally of US imperialism along with other right-wing 'Lima Group' governments in the Organisation of American States (OAS). Cuba's alliance with Venezuela and other countries in Latin America was defended vocally by demonstrators as these countries resisting US imperialism have come under attack from the OAS. 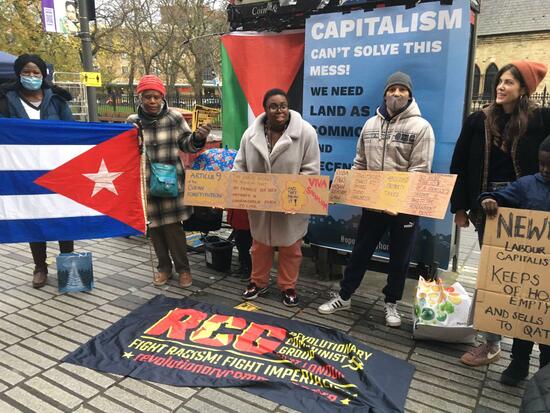 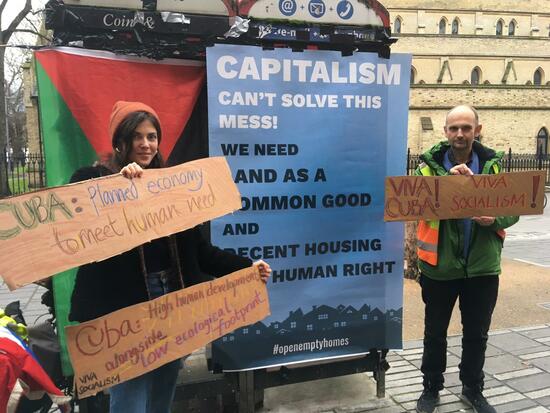 Members of the Revolutionary Communist Group and the Focus E15 housing campaign came out in East London in solidarity with Cuba. Their placards displayed the stark difference in the organisation of housing under British capitalism and Cuban socialism, noting the reforms to home ownership in Cuba and the dire homelessness situation in their community. 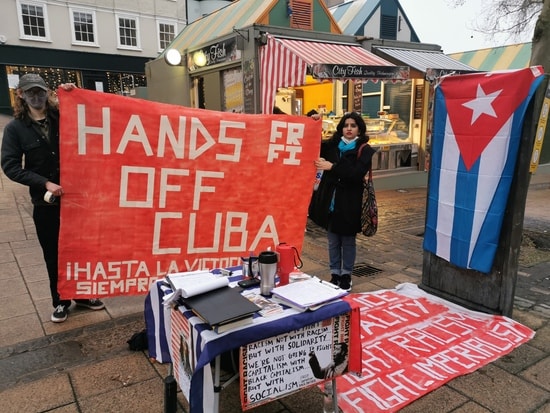 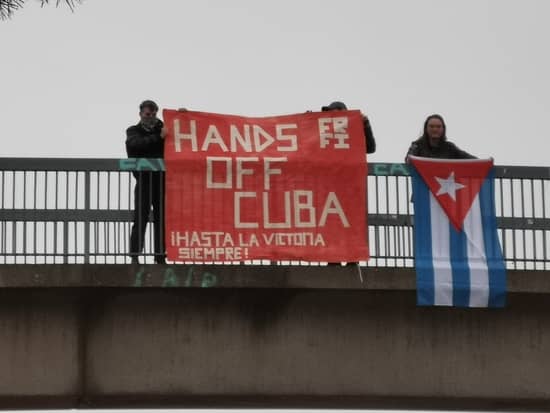 In Norwich, supporters held a public stall with a large banner reading "Hands off Cuba", demanding an end to imperialist intervention and attacks on the island. Later they organised a banner drop to further spread their anti-imperialist message. 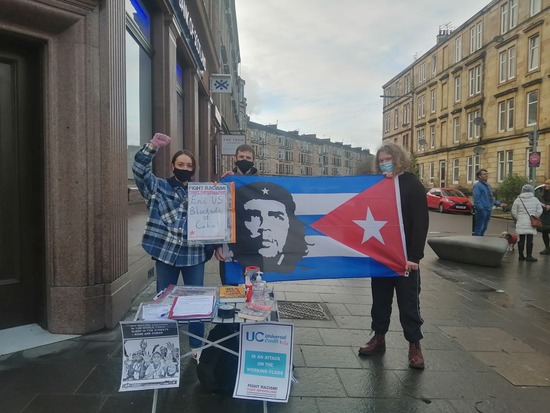 Comrades from Glasgow organised a street stall in defense of Cuba against the US blockade, whilst pointing out the brutal attacks on the working class in Britain as well. 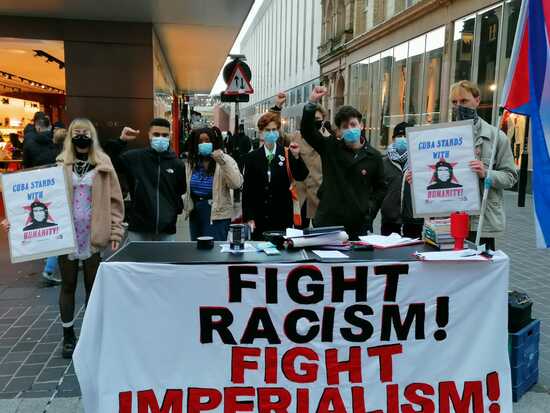 Supporters of Fight Racism Fight Imperialism in Liverpool gathered for a street stall. Their placards emblazoned with the slogan: 'Cuba Stands With Humanity!', in reference to Cuban medical internationalism assisting other countries in their struggle against the Covid-19 pandemic. 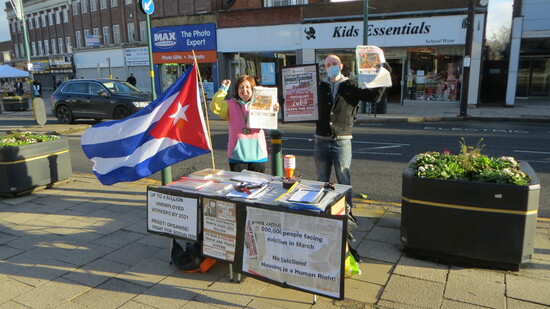 Birmingham Revolutionary Communist Group held a street stall in the working class neighbourhood of Northfield, discussing the massive impact that healthcare privatization and cuts have had on the community. The Cuban flag was flown and speeches were given to show the shining example that the Cuban revolution shows when it comes to public health. 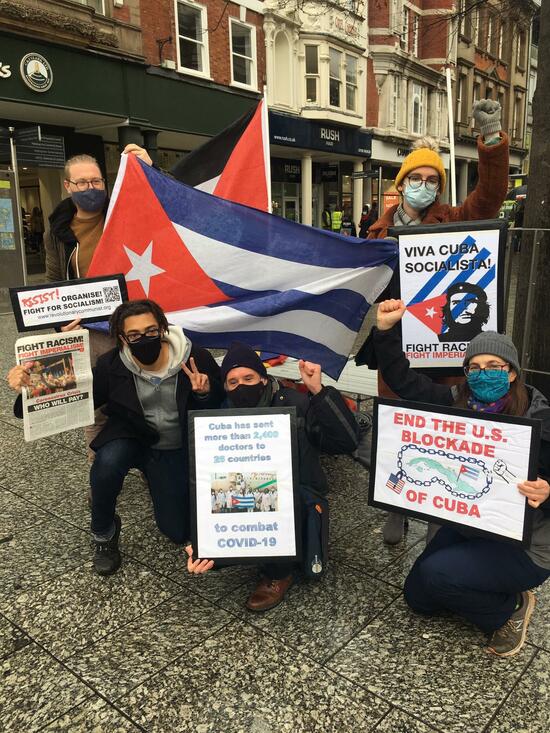 Elsewhere in the midlands members of Nottingham RCG showed their solidarity with the Cuban revolution as well. 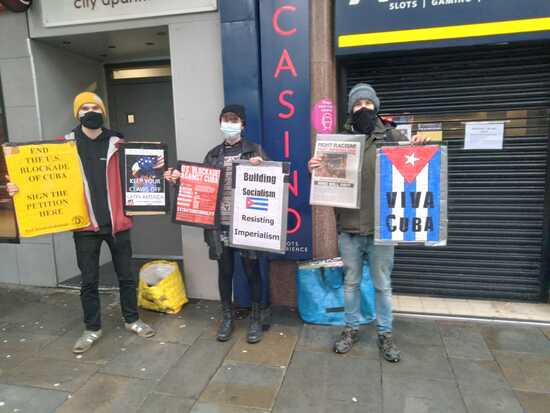 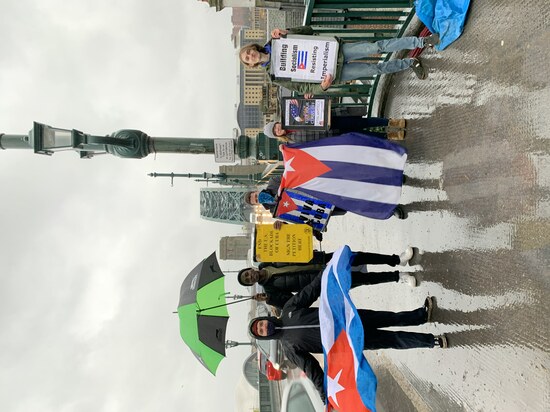 Supporters took to the streets in Newcastle to decry the US blockade, collecting petition signatures from locals in order to spread the word and build support for socialist Cuba. They also gathered again on Sunday 13, proving that bad weather was not enough to dampen their anti-imperialist spirit! 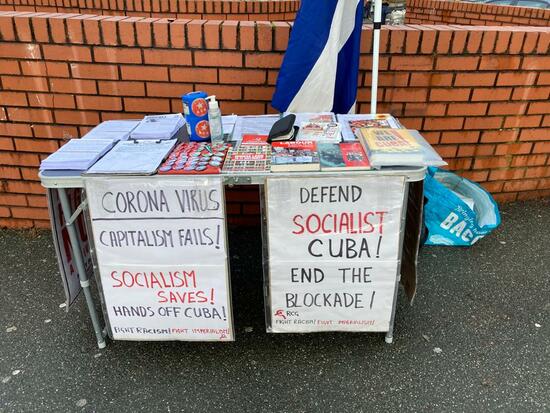 A stall was organised in Manchester, pointing out the different approaches to the Covid-19 pandemic in Britain, where capitalist interests come first and tens of thousands of people have died, and Cuba, where socialist planning means that everyone can receive adequate healthcare.

In periods of increasing attacks such as this, it is more important than ever for socialists in Britain to show their support for the Cuban revolution. The blockade and propaganda warfare must be resisted.