The world stands with Cuba in condemning genocidal US blockade 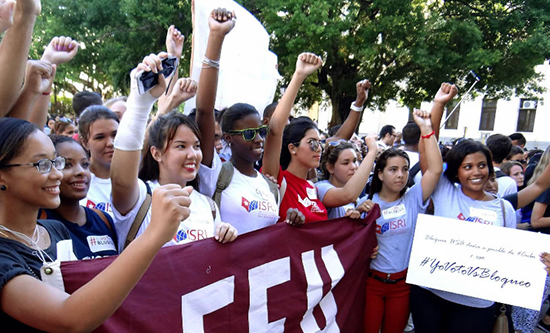 Once again the resolution presented at the UN General Assembly on 1 November 2018 calling for the ‘necessity of ending the economic, commercial and financial embargo imposed by the United States against Cuba’ received overwhelming support, approved by 189 countries and opposed by only two – the US and Israel. The resolution condemning the US blockade has been presented to the Assembly for 29 consecutive years. The US and Israel are its only die-hard supporters. The blockade began in July 1960 when the US first forced import reductions on Cuban sugar, despite having a set quota. It reflects the US’s attempts to bring about the fall of the revolutionary Cuban government by exerting economic pressure. RIA AIBHILÍN reports.

When Fulgencio Batista seized power in Cuba through a military coup in 1952 the US continued to fund the dictator’s reign of terror. Batista operated at the behest of US interests. Mean­while almost all US aid to the country was invested in weapons assistance, working to strengthen Batista’s dictatorship while the Cuban population suffered mass unemployment and poverty.

The 26 July Movement, headed by Fidel Castro, and its allies succeeded in overthrowing Batista and established a new revolutionary government on 1 Jan­uary 1959. The US, eager to protect its business interests in the country, quickly established diplomatic relations.

This didn’t last long, however, with anti-Cuban sentiment appearing in US Congress almost immediately after Cuba’s introduction of the First Agrarian Reform Bill in June 1959. The bill oversaw expropriation of private property. Sugar plantations were among those lands being seized for redistribution between workers. This was ‘unacceptable to a country [the US] whose corporations owned the best sugar-cane land in Cuba’.* US capital had long penetrated the Cuban economy, producing two thirds of Cuban sugar by the 1920s.

When it became apparent the revolutionary Cuban government was not going to capitulate to imperialist de­mands, the US National Security Coun­cil began preparations for its overthrow. This translated into a failed coup in 1961, where US-backed counter-revolutionary forces were humiliated and defeated at the Bay of Pigs within 72 hours.

Operation MONGOOSE was established after this failure, described by the CIA as a programme of ‘political and economic operations to isolate the Castro regime’. The CIA acknowledged that ‘these activities will have some negative impacts on the Cuban people’. This is illegal under international law and an act of genocide as defined under Article 2 of the Geneva Convention on the Prevention and Punishment of the of the Crime of Genocide, which stipulates that genocide is ‘deliberately inflicting on the group conditions of life calculated to bring about its physical destruction in whole or in part’. And yet this act of aggression against Cuba continues.

The blockade is the greatest obstacle to the development of the Cuban economy. Its implementation has caused accumulated damages of more than $933.6bn as Cuba is unable to freely trade with the US and is forced to pay excessive transport costs for imports from distant markets.

The blockade is imposing severe suf­fering on the Cuban people. Last year 224 people per 100,000 inhabitants died in Cuba as a result of the blockade (Telesur 1 November 2018). Cuba is banned from purchasing the drug Temozolomide, patented by US company Merck & Co, key for chemo­therapy treatment; is limited in access to scientific information and computer tools; is refused purchase of high-tech equipment such as the mass spectrometer used for diagnosis and early detection of metabolic diseases; and is forced to spend $1m a year on importing primary materials to produce the 24 most common pharmaceutical products they are unable to purchase from the US. That Cuba is a pioneer in world health and science is in spite of these obstacles.

The introduction of the Helms-Burton law in 1996 extended the blockade to cover third countries, with the US Department of Treasury, Office of Foreign Asset Controls (OFAC) imposing fines on companies that trade with Cuba. Britain adopted the ‘Protection of Trading Interests Act on Extra­terri­torial US Legislation’ the same year, meaning British companies who trade with Cuba could face penalties.

In 2016 the RCG’s Cuban solidarity group Rock Around the Blockade had its PayPal account shut down, while a fundraiser set up by Cubans in the UK to send a piano to Havana had its funds frozen, both under OFAC. This is illegal under British law.

The thawing of US-Cuba relations under the Obama administration’s ‘normalisation’ has been reversed by Trump. This hostile policy towards Cuba has caused accumulated damages of $4m between April 2017 and March 2018. On 1 November 2018 the US national security leader John Bolton announced new sanctions to be put on ‘the troika of tyranny’ Cuba, Venezuela and Nicaragua, including adding over 20 entities owned by Cuba to a sanctions blacklist. This intensification was reflected at the UN General Assembly.

Unlike previous years at the Assembly, this year the US presented eight amendments to Cuba’s resolution. The amendments sought to justify the blockade against Cuba on spurious claims of human rights abuses, including an ‘absence of women from the most powerful decision-making bodies’. Women in fact make up 53.2% of members in Cuba’s National Parliament (see FRFI 266) and 48.4% of the Council of State, while 22% of US Congress members are women. In his speech to the Assembly, Cuba’s Foreign Minister Bruno Rodriguez Parrilla rightly pointed out that ‘the United States does not have the moral authority to criticise Cuba, nor anyone, when it comes to human rights. This government is responsible for crimes against humanity.’

All eight amendments were de­feated by an overwhelming majority. Only Ukraine and the Marshall Islands joined the US and Israel to vote in favour of any of them. 31 delegates spoke in favour of Cuba. The representative from Vietnam recognised the ‘grave damages to the Cuban people’ caused by the rec­ent intensification of the blockade, while Nicar­agua’s representative recognised that ‘Cuba is solidarity. Our Cuban brothers and sisters have always been the vanguard for responding to emergency situations in any part of the world.'