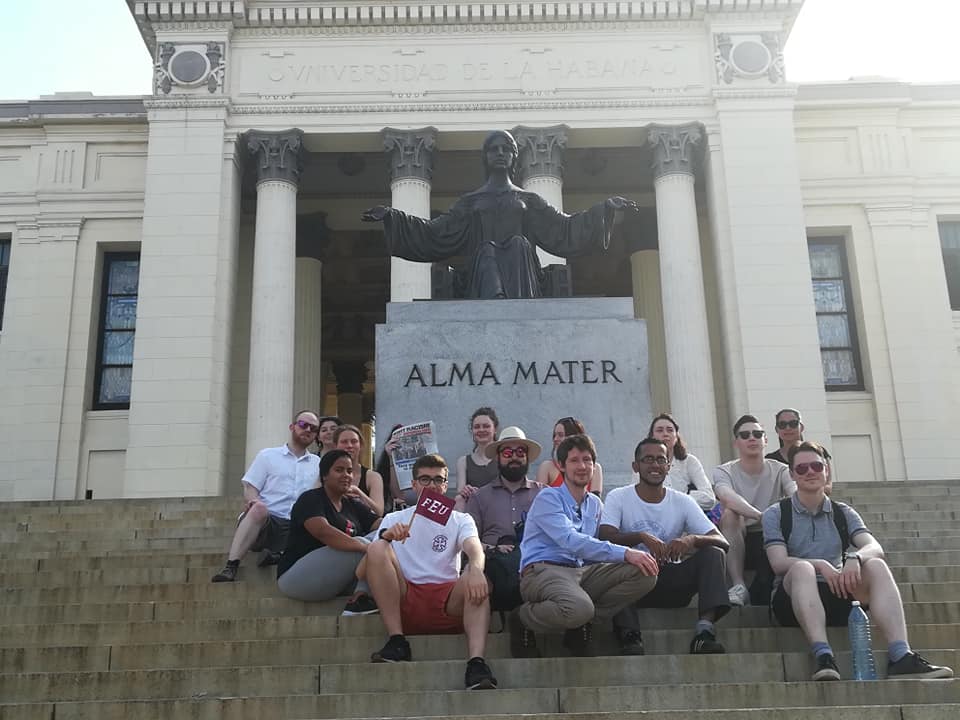 At the University of Havana, we had an exchange with the University Student Federation (Federacion Estudiantil Universitaria, FEU). The FEU represents the interests of university students in various platforms. Cuba’s parliament has representatives elected from amongst the FEU, and during our exchange the students discussed the new constitution’s draft in local FEU meetings.

In Cuba, education is a right rather than a privilege. Everyone can access universities and efforts are made to eradicate inequality between regions and institutions.

Cuban higher education is free, while students’ right to housing and other basic needs are guaranteed. Students also receive a small allowance so that they don’t have to work while studying. Foreign students with scholarships such as those at the Latin American School of Medicine (ELAM) are entitled to those same rights.

This contrasts with the expensive tuition fees and living costs that students have to face in Britain. British and EU students can access tuition-fee and maintenance loans, meaning that they can but postpone paying tens of thousands of pounds. A common three-year undergraduate course already costs £27,000 for British and EU students. Non-EU students, including residents, have to pay much higher fees – sometimes double – and can’t access government loans. Meanwhile, university staff, from academics to maintenance workers, are increasingly put on temporary and zero-hour contracts.

Cuban universities offer as many spaces as required by the planned economy. For example, if the state predicts that it will need ten geographers, universities would take in ten students for geography. In Britain, due to a lack of planning, many students are unable to work in the career they chose. To prevent regional inequalities, universities are spread out throughout the country and students often attend the nearest one. Exceptions are made for those studying careers that are only offered by certain institutions in Cuba. In essence, students apply for careers rather than for institutions with varying amounts of resources and prestige.

A journalism student we met told us about how students are involved in programmes to further the Cuban revolution. Some students are working to create Portales ciudadanos or ‘citizen portals’ – websites where locals can raise concerns to their local representatives in government. Pilot Portales ciudadanos are being tested by three local councils in Cienfuegos and Havana. The students were also visiting schools as part of a campaign to combat discrimination against LGBT people, as part of the ‘glasses for gender’ project, whilst Journalism students were working with the psychology department to teach underage people who have committed crimes to make films and TV programmes.

The students we met with also told us about their experience of the process to update the constitution, which saw drafts discussed and amended in thousands of meetings across the island, culminating in a referendum. One student explained:

‘I could participate in meetings in my CDR [Committee for the defence of the revolution, a grass-roots community organisation], FMC [the women’s federation], FEU, Board of Universities, UJC [Young Communists’ Union] – and as a worker I could be a member of the party or a member of the union and participate there.’

The student also told us how the data was taken into consideration by the government:

‘People could add to or eliminate sections or change the draft in a general way. Once you had all the opinions you saw that the same paragraph needed to be changed, added or eliminated based on the percentages of each section.’

The level of political consciousness and involvement in national decision-making that ordinary Cuban students have really challenges the idea of ‘Western-style democracy’ that the US or Britain promote as a role model.

The students we met are also knowledgeable and proud of the FEU’s origins. In the hall where we met, the walls displayed pictures of students who took part in the struggles against Spanish colonialism and Fulgencio Batista’s dictatorship. In particular, they told us about how a group of students in the FEU attacked Batista’s palace in 1957 in an attempt to assassinate the dictator. Although the attempt failed and some 40 rebels were killed, including FEU leader José Antonio Echeverría, the example they set was an inspiration to the other forces of the Cuban revolution. Today’s students remember and celebrate this revolutionary legacy.