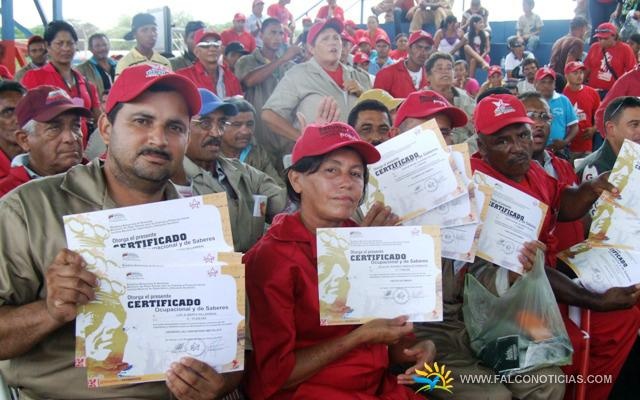 Does the campaign satanizing collectives in some way wear down the people who make them up?

Absolutely not. The same thing happens within the collectives as within chavismo in general. Whenever these fascist assaults present themselves; People draw together and unite. The recent antichavista activities, the most virulent to date, have only inspired us to deepen our efforts to reclaim the work of our collectives and communities. The collectives play a role in their barrios that no one else can, encouraging political education, cultural expression and sports. Many of the Bolivarian government’s policies, for example the missions, can only be carried out thanks to the existence of these collectives.

What is the true relationship between collectives and firearms?

The reality of it is that there is no identification between the collectives and firearms. I believe that both the commander Chavez, and president Nicolas Maduro each made their position unequivocally clear; any person who raises weapons in alleged defense of the Bolivarian Revolution is out of line, and outside the limits of the law. The monopoly of legitimate violence is exercised by the state alone, as a democratic obligation. We have to make an effort not to allow these false judgments to take root, because collectives are not synonymous with weapons and violence, but with organization and grassroots movement, culture, and of working alongside the Bolivarian government to resolve concrete problems in the communities.

Is the association of collectives with violence part of a right-wing political strategy against grassroots organizing?

Undoubtedly, a very clear-cut strategy. In that sense, the opposition has been totally coherent. They know that it is necessary to their political objectives to criminalize any method of grassroots organizing, because any manifestation of such is a direct threat to their strategy. They know that as long as people organize, the possibilities of collapsing the revolution grow weaker. But on top of that there is a clear interest in demoralizing the revolutionary ranks. That is what Capriles Radonski did, very skillfully, in his 2012 campaign, when he talked about the “enchufados.” [People said to have more access and benefits for being “plugged in” to the government network.] There was a moment we thought that was directed towards high-up government workers, but the truth is that it was an attempt to bring down the communal councils and their mouthpieces. It was based on situations found in a small number of communal councils, whose participants had been criticized within their community for practicing corruption. The campaign sought to exaggerate these events and make them appear to represent universal reality, as if it was happening everywhere, with the ultimate goal of destroying that form of popular organizing. The right knows that within the communal councils are people who never had a voice in politics, who never administered public resources, are finally participating. And for that reason it is a fundamental space in the Bolivarian Revolution. The strategy is that the people will stop believing in their own potential, that they begin to see their local organizations and representatives as if they were a problem, when in reality they are part of the solution. Finally, the right, especially the extreme fascist wing, has multiple reasons to criminalize collectives, because by condemning them as the culprits of their own violent actions, they’ve created a scapegoat to say that the violence is coming from elsewhere.

Aside from these campaigns, grassroots organizing confronts other challenges. For example, the predominant capitalist values such as individualism and greed in popular sectors. What is your perspective, as someone who at first theorized on these topics and ultimately has experienced them firsthand?

I believe the survival of this political process depends on our capacity to permanently reinvent our approach to organizing and participation. From the beginning, president Chavez wished to improve the structure of a representative democracy, starting with the traditional spaces for participation. There is also a systematic effort to reinvent the military and police. I admit that at one time I thought it was necessary to revise and reinvent the communal councils.

Notwithstanding, throughout my experience as a minister, especially when we launched the Gobierno de Calle (street government), I understood better what Chavez meant to create through the communal councils. That was when I realized, humbly, the importance of the communal councils for our revolution.

There is no place in the world where popular organizing does not exist. In every corner of this earth you can find people who know how to identify their community’s problems. The truth is that we haven’t been capable of telling the story of the profound transformation our political culture has undergone in Venezuela. As a rule, people who are leading voices in those organizations attend to collective problems much more than their individual or family’s needs. Of course there have been some cases when individualism has prevailed, and many cases, on the other hand, where the community doesn’t address the problems and leaves all work to community members who, out of necessity, become representatives of those people who are not participating. Also we’ve seen problems with the State’s response, the response of the institutions, because we have some spokesmen there who serve as mediator, but when the State does not respond, it reflects badly upon them and the spokesperson alike. In any case, this generation of men and women, especially women, has assumed that responsibility, that lead role, deserve recognition beyond formality. At some moment we will have to stop and value the enormous work that has been accomplished in these spaces. By that same coin, I think we are obligated to be categorically firm in the cases that have betrayed the trust of the citizen assemblies. Whoever uses their condition as spokesperson to accumulate wealth or act on their own individual interests or those of select groups, should be sanctioned. They are obstacles that appear along the road to revolution, and should be viewed as they are; isolated cases that do not speak to the general reality.

Has the so-called social accounting (contraloría social) advanced parallel to these changes in political culture?

In terms of resource management there have been many prejudices. It is said that we are giving public funds to people who do not know how to administrate them. Well, precisely, it’s about taking a new path. We’re talking about a people who never were called to participate in how their funds were managed. It’s obvious that at the beginning there will be problems. That does not mean we are complicit in letting mistakes happen, our role is to make a clear path for social accounting, providing more efficiency. This implies, for example, that the State must offer on its behalf simplification, de-bureaucratization, of its proceedings in order to be more efficient in its support for the communities benefitting from their communal councils.

It’s clear that the private media is an enemy of popular organizing. But what happens with public, community and alternative media? Have they counterbalanced the private media’s attempt to pervert public opinion?

I believe they have advanced, but slowly. That’s why the president has insisted on projects like VTV Communes, which we’ll be seeing soon. We have reflected at great length and I can say, as a form of self-criticism, we still have much work before us if we wish to disseminate the work of Poder Popular (people’s power). In order to do so we must tell many stories, and each story is happening right now, simultaneously, all over the place. There are thousands and thousands of people who have something to say. We need to improve on their outreach.

There is an sector inside the revolution, important to ideological discussion, which argues that people’s organizing in communal councils and communes is not leading us towards socialism because it generates a kind of exaggerated individualism of small sectors that only act upon their specific interests. What is your response to this?

I do not agree at all. I reiterate my belief that the revolution depends upon its ability to reinvent means of participation. In October of 2012, when Chavez gave the Golpe de Timon (“Turning the Wheel Around”) speech, he spoke of a massive network that existed all over the nation. That logic implied in a lattice-like structure is different than traditional forms of participation. I am a strict defender of the party because it is necessary to complete certain tasks, but every revolution should experiment constantly in the area of organization outside the party lines. I’m not saying the communal councils are the ultimate and definitive form of participation, but it seems to me that in these moments within the communal councils rest the fate of the Bolivarian revolution. If they did not exist, the revolution would never have been sustained. If this will be transformed into something better in the future, we shall see. In any case, nobody attempting to make a political analysis out there will be able to decide, it’s up to the Venezuelan people and the leaders among them. I believe that sometimes we lack enthusiasm when putting our trust in the people and in the political direction of the revolution. In the past few months, president Maduro has shown that he is not only the constitutionally legitimate president but also that he’s progressively amounting to the political leader of the revolution. I know how hard it is for us to think of a leader who isn’t Chavez, but I believe that president Maduro is on the path to becoming one. This is a reflection that we, the bolivarians who come from the old left vanguard, must make; if we had just a little more faith in the people, maybe they would achieve what Chavez achieved in 1998.