Why the majority of Venezuelans will vote Maduro for President 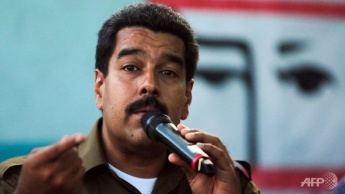 Nicolas Maduro is set to win Venezuela’s presidential election on 14 April, not because of his manipulation of Chavez’s death, as the opposition is shamefully claiming, but because of his record as a committed socialist.

Maduro’s political career started as a union leader while he was a Caracas bus driver. He even drove himself in a bus to and from registering his candidacy for the presidency on 11 March, mocking the opposition who have attacked him for not having a university degree.

When Hugo Chavez was imprisoned after the failed 1992 coup, Maduro was part of the successful campaign for his release and in 1997 Maduro and Chavez were founding members of the Movement of the Fifth Republic (MVR), forerunner of the United Socialist Party of Venezuela (PSUV).

Chavez won the presidential elections in 1998 on an MVR ticket. Meanwhile Maduro was elected to the Venezuelan chamber of Deputies in 1998 and, in 1999, to the National Constituent assembly that drafted Venezuela’s new constitution. He was subsequently elected to the new National Assembly in 2000, becoming its official Speaker.

From 2006 to 2012, as Minister of Foreign Affairs, Maduro strengthened Venezuela’s international links. During this time Venezuela supported Libya, Syria and Iran against imperialist aggression and deepened Venezuela’s crucial role in Latin American and Caribbean cooperation agreements ALBA, Unasur, Celac, and Mercosur. In 2012 he was elected Vice President.

Chavez described Maduro as ‘a complete revolutionary, a man of great experience despite his youth, with great dedication and capacity for work, for leading, for handling the most difficult situations’, urging Venezuelans to vote for Maduro as the next President after his death.

At his official registration as presidential candidate on 11 March, Maduro presented Programa Patria, the programme for socialist development on which Chavez was elected in October 2012.