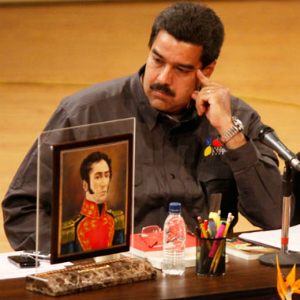 “What we hadn’t thought about was continuing the revolution without him [Hugo Chavez] leading the way,” he added. He has called the next presidential period, 2013-2019, the “revolution in the revolution- efficiency or nothing”.

“Here we are in a long transition for the construction of a new, more humane society, based on the principles of Jesus Christ, the principles of [Simon] Bolivar and under the fresh direction of Hugo Chavez,” he said.

He emphasised that the new government team should “be in the street with the people” and also called for “Bolivarian dialogue” with those who have “opposed this revolutionary project”.

“I want to hear their reasons,” he said, also stressing that “there will be no pact with the bourgeoisie, here there will be dialogue with the whole country”.

The government will follow the Socialist Plan of the Nation 2013-2019, originally proposed by Chavez last year. Further, the main tasks of the new cabinet will be the development of the productive economy, a new electrical system, relaunching the social missions, grassroots power and the construction of a new “socialist life”, and the development of a new mission named “Efficiency or Nothing”, Maduro said.

Various ministers also spoke at the ceremony, with the new minister for the environment, Dante Rivas, promising to work on Venezuela’s rubbish collection problem. “Rubbish will stop being a problem, it will become a solution. It won’t be called ‘rubbish’ any more, but rather ‘primary material',” he said, referring to plans to implement recycling.

Ministers Jorge Giordani and Reinaldo Iturriza will form part of a team to consolidate the Centre of Advanced Thought Studies. Maduro announced the creation of the centre when he swore in as president on 19 April.

He also announced the resumption of the Barrio Tricolor plan, which involves beautifying and refurbishing the barrios, and that Edmee Betancourt, previously the minister for trade, will be the new president of the Central Bank.

Finally, he said that on the upcoming 1 May, Workers’ Day, he would “march with the working class”.