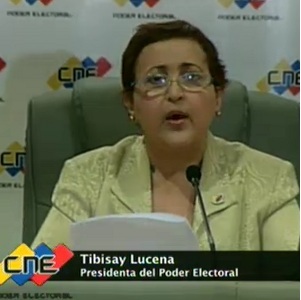 The CNE’s decision will not be a full recount of the votes as the opposition has demanded, but rather an audit of the remaining 46 percent of the votes that were not audited on the night of the elections.

“We will select a sample that will be audited for 10 days and a report of the results will be emitted. This procedure will be repeated every 10 days for 30 days in the presence of witnesses from both camps,” said Lucena.

Lucena said that 400 ballot boxes would be audited per day, and that the start date of the audit process will be announced next week.

Opposition leader Henrique Capriles immediately responded by accepting the CNE decision, and claimed that the full audit would reveal the elections were fraudulent.

“Sooner or later the truth will come out, and not only will it come out but it will have real consequences,” he said.

Capriles claimed that according to their analysis the problems with the vote count are in the 46 percent of the ballot boxes that were not audited on Sunday night.

In addition, the examples of irregularities in the vote count given by Capriles so far have all been shown to be false.

There also seemed to be some confusion about the extent of the audit. Capriles insisted that it would be a complete review of voter rolls, vote tallies, and paper receipts. However, the CNE audit is strictly a comparison of paper receipts to vote tallies to make sure they match.

Capriles called on his supporters to continue protesting against the government, and called for activities to protest President Nicolas Maduro’s swearing-in ceremony on Friday.

Referring to the wave of violence in recent days, including attacks on government health clinics and PSUV political party offices, Capriles accused the government of committing the attacks themselves, and did not acknowledge the violent deaths of several government supporters in recent days.