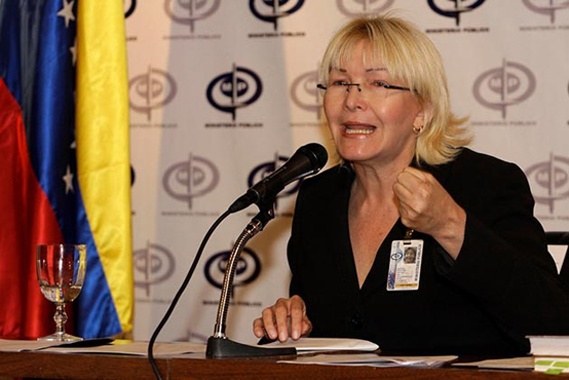 The Attorney General, Luisa Ortega Diaz, revealed that there are currently 2,272 citizens being investigated for currency speculation and black market dealings this week, as well as denouncing yet another violent attack on her of?ces in Caracas in which “armed persons opened ?re against the Public Ministry, causing destruction.”

The crimes of currency speculation focus on those individuals and businesses that have applied for subsidized foreign currency for ?ctitious import contracts or personal travel, only to later sell the currency on the illegal black market for up to ten times its value. Such practices produce astronomical personal pro?ts, public losses, and a phenomenal drain on the economy, as well as inducing shortages, in?ation, and devaluation. During the last 10 years it is estimated that with the amount of foreign currency lost in illegal speculation, Venezuela could have ?nanced the World Cup four times over.

Similarly, Ortega Diaz explained that regarding the ongoing investigation into the assassination attempt against the President of the Republic, Nicolas Maduro, which was made public a month ago, and which implicated numerous high pro?le opposition leaders: “we are investigating. We still haven’t reached the bottom of this case because it seems ever more serious the more we investigate.” She promised to “take the necessary measures.”

In similar news, the National Auditor, who is responsible for public auditing and anticorruption, informed the nation that 1,580 public employees have been disquali?ed for corruption so far this year, including citizens from both political wings.

Adelina Gonzalez encouraged the tides of revolutionary citizens to convert themselves into public auditors and implement public, collective controls on the management of public funds.

Following the anti-corruption crusade initiated by President Maduro on assuming the presidency in 2013, thousands of of?cials have been punished or imprisoned, including ex-Ministers, ex-Governors, and Mayors.

“There are still foci of corruption, but there has also been an awakening in the citizenship,”,explained Gonzalez, who emphasized that “there isn’t more corruption [than before], but rather better visualization [of the problem].”

She explained that the number of sanctions for mismanagement of public funds has skyrocketed since Maduro called on the nation to combat the problem. While in 2012 her of?ce issued only 45 sanctions, in 2013 this ?gure rose to 3,585. The majority of those sanctioned belong to the governing PSUV party,* *she elaborated, which is explained by the PSUV’s overwhelming victories in recent elections, meaning that they control the vast majority of administrative of?ces of State, such as Mayors, Governors, and Deputies.

The positive news comes as yet another high pro?le PSUV leader was charged with serious embezzlement, criminal association and deliberate over-budgeting this month. Eugenia Sader, who was Health Minister under Hugo Chavez between 2010-2013, is awaiting sentence for the charges.

Gonzalez, responsible for the so-called `Moral Power of State,’ further explained that Venezuela has “one of the most modern legal systems in the world on the theme of the struggle against corruption.”