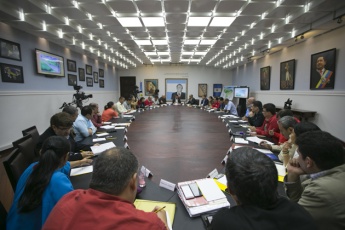 “We have analyzed our processes, problems with bureaucracy, excessive paperwork in some cases. We have to accelerate our electronic initiatives,” Arreaza said. “President Maduro has a good amount of input, and we expect there to be announcements in the coming weeks.”

On Twitter later in the evening, Maduro thanked Arreaza and his ministers, noting that the action “will allow me to provide the necessary changes” to the government.

While Economy Vice President Rafael Ramirez had previously indicated the possibility of unifying Venezuela’s three exchange rates, he noted on Monday in an interview with Caracas newspaper El Mundo that the government might instead launch a new, two-tiered exchange system at the end of 2014.