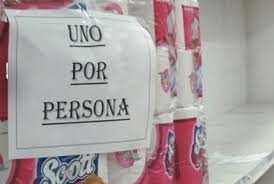 The move is part of a wider government offensive to combat shortages in certain basic products such as milk, toilet paper and corn flour, which along with rising prices have been affecting consumers this year.

During Sundecop’s occupation of the factory the consumer protection agency will examine processes of production, distribution and sale, as well as input requirements for the manufacture of the toilet paper.

Manpa S.A. will provide Sundecop with a liaison team to provide documentation on inventories, production costs, sales chains, production capacity and idle capacity, among other areas.

At the end of the occupation period Sundecop will release a report with information on any irregularities in the production and management of the factory, and corrective measures to be applied.

Since the beginning of this year the Venezuelan economy has experienced rising prices and an increase in shortages of certain basic foods and hygiene products, while the bolivar currency has fallen sharply in value on the black market.

Officials argue that these trends are largely due to an “economic war” being waged by economic and political sectors opposed to the government, which seek to disturb economic activity through acts of sabotage, hoarding products to create scarcity, and attacking the national currency.

Meanwhile the conservative opposition blames problems in the economy on government price controls and restrictions on foreign currency flows, arguing that these interfere with the “natural” functioning of the market.

Earlier this month the government created the High Commission for the People’s Defence of the Economy in order to combat the “economic war”. It is directed personally by President Maduro and incorporates ministers and grassroots activists.

Measures adopted so far include stimulating production with subsidies, raising some price controls, increasing imports from neighbouring countries, increasing the flow of foreign currency to importers and priority sectors, inspecting producers of foodstuffs and food distribution networks, increasing monitoring of price control infractions, and establishing a telephone line for citizens to denounce acts of sabotage in the economy.

The government is also looking to modify the law combating the misuse of foreign currency allocations to businesses and individuals, in order to better prevent practices which abuse allocations of state-granted dollars and contribute to devaluing the national currency.

Authorities aim to reduce relative shortages of basic products to half their current level by the end of the year, which would bring them below the level considered “normal” by the country’s National Institute of Statistics.