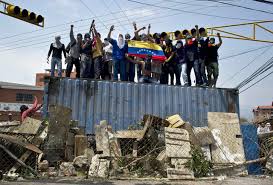 In response to the violence instigated by the Venezuelan elite, the working classes of Venezuela took to the streets this week. They went out not with pistols or grenades, but with brooms and shovels to clean the burnt trash and remove the barricades that have restricted the free movement of thousands of citizens.

In many states around the country, public servants, revolutionaries, volunteers, motorbike riders, officials, and even elected representatives such as governors have joined forces in impressive operations of public cleaning. It is a peaceful, humanitarian response to the chaos created by the fascist protests.

Trash collection is, according to the constitution, the responsibility of the mayor of each municipality. However, in many municipalities controlled by right-wing mayors, such services have failed in recent weeks. This has left an impressive accumulation of trash, bringing with it health problems such as respiratory illnesses.

This trash proved an effective tool to create disorder by those minority sectors looking to undemocratically oust elected President Nicolas Maduro. Numany highways and transit routes have been blocked off by burning trash since the protests began two weeks ago. Opposition leaders called for a “great blockade” of the streets on February 24.

The eastern city of Ciudad Bolivar was one of the cities where the government's operation was launched. In Ciudad Bolivar, a student from the Bolivarian University of Venezuela who preferred not to give his name explained that “this minority group, this fascist group wanted to disturb the peace in Ciudad Bolivar, what we want for Ciudad Bolivar is to say no to the violence, yes to peace, we are here cleaning the streets of the city because we love Ciudad Bolivar”.

He also appealed to the opposition residents of the sector, calling on them to “come out and help us clean the city”.

In the Andean city of Merida, which has seen some of the most widespread protests due to its influential and populous upper- and middle-class population, more than 700 revolutionaries took part in the cleaning operation, which began on February 23.

With the assistance of public institutions, such as PDVSA state oil company, the Merida Tourism Corporation, and the state government, volunteers and conscientious citizens that have made it often impossible to travel across the city for the past two weeks.

On February 23, those clearing the streets opened the road leading to a major hospital which had been blocked off for days. This had left it short on medical supplies and food.

In the Las Americas Avenue, residents had also been held hostage by opposition bands, which had sealed the entrances to the tower blocks and had ruled the avenue with firearms and fear until the cleaning operation arrived. Trash collection trucks had not been able to pass for nearly three weeks due to the barricades erected.

After the action, fascist bands remounted barricades, some residents said.

In Carabobo state, the motorised groups took charge of the cleaning process, with more than 500 motorbike riders taking part. The Coordinator of the Bolivarian Motorised Forces of Carabobo, Gilberto Ceballos, said: “Instead of throwing stones [like the fascist groups], we are here to work.”

Similarly, in Caracas, the motorised brigades sympathetic to the revolution were ordered to participate in the cleaning of the streets and the opening of the major avenues and roadways.

Many participants in the cleaning operations have drawn attention to the constitution of the republic, which underlines the rights of all citizens to the free transit of the national territory, to work, and to enjoy the public spaces.

Volunteers, dressed in red to demonstrate to the communities that they are supporters of the Bolivarian government of President Nicolas Maduro and not the right-wing opposition, were subject to attacks from the fascist forces trying to stop their work.

In Merida, the operation had to be accompanied by the National Guard and police to protect the workers, as in certain sectors they were confronted by bands throwing rocks, bottles, Molotov cocktails and even firing live rounds from the tower blocks in a bid to sabotage t efforts to clear their trash from the streets.

Opposition supporters were heard insulted the workers and volunteers with racist remarks. “Carry on cleaning you dark skinned people, that’s what you are good for” shouted one woman from her middle-class home, whie another shouted “that’s right, the chavistas (supporters of Maduro’s government) SHOULD clean up OUR trash”.

Maduro has called on the revolutionary forces to intensify their workload to counter the hate and negativity of the opposition.