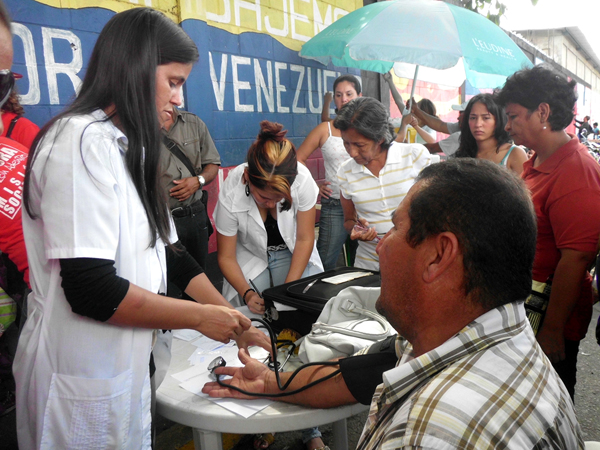 In an illuminating report Ewan Robertson of Venezuela Analysis exposes the deliberately misleading headlines.1 Venezuela’s National Statistics Institute (INE) records income poverty every six months. In the first half of 2012, income poverty was 27.2% a similar rate recorded every year since 2007. In the last half of 2012, income poverty dropped sharply to 21.2%, linked to a 32.5% minimum wage increase, comparatively low inflation (20.1%) and the creation programmes adding 800,000 pensioners and single parents to the welfare system. Then, in the first half of 2013, income poverty increased to 29.4% – coinciding with a currency devaluation in February and the death of Hugo Chavez in March. Inflation rose to 56%, food and goods shortages developed, and the bolivar’s value on the black market plunged. In FRFI 236 we exposed the currency fraud, speculation and hoarding at the root of inflation and scarcity, tactics of the economic war unleashed by the ruling class as they seized the opportunity for destabilisation after Chavez’s death.

Inflation and scarcity, underlined by hoarding and speculation, form a familiar pattern in Venezuela during times of high political tension and conflict. A 2013 report by the Central Bank of Venezuela (BCV)2 highlights that following the Caracazo uprising in 1989, inflation jumped from 40.3% to 81%. The monthly scarcity index spiked to 24% in the oil lock-out of 2003. As income poverty is directly affected by inflation, the eight percentage point increase following the death of Chavez, with the prolonged economic war and street violence that ensued, is no surprise. Yet income poverty again dropped to 27.3% in the last half of 2013, probably as a result of a three-tiered minimum wage increase and President Maduro’s offensive against fraud, speculation and hoarding.

The statistics the imperialists don’t publish

Unsurprisingly, while happy to circulate misleading scare-stories about Venezuelan poverty, the bourgeois media ignores any statistics which reflect the country’s social and economic development. The INE’s report Venezuela: Social and Economic Environment, published in May 2014 shows that between 1998 and 2013:

The Cuban-run Mission Barrio Adentro, the core of the Bolivarian Revolution’s universal free health system, has meant 1.7 million deaths have been avoided3 since its creation in 2002. Infant mortality has dropped from 21.36 per 1,000 live births in 1998 to 13 in 2012, and life expectancy has increased from 72.2 years in 1999 to 74.3 years. 82% of the population receives care through the public health care system. Venezuela’s Human Development Index is 0.771, placing the country in the ‘High’ category of human development.

Venezuela also supports poverty reduction, infrastructure development and social provision on a regional level. Alongside socialist Cuba it has initiated alliances which promote regional cooperation and mutually beneficial trade such as the Bolivarian Alliance for the Americas (ALBA) and the Community of Latin American and Caribbean states (CELAC). CELAC recently pledged to eliminate poverty and malnutrition in Latin America and the Caribbean by 2024 promoting universal access to education, healthcare and adequate nutrition.

The recent announcement by the BRICS countries (Brazil, Russia, India, China and South Africa) of plans to create their own bank is also of huge significance to Venezuela. A BRICS bank would provide a direct alternative to the dominance of the International Monetary Fund and would give countries like Venezuela, as well as Cuba, Ecuador and Bolivia access to trade, credit and investment without having to accept the dictates of US?and European Union imperialism.

Venezuela’s Bolivarian Revolution demonstrates that, despite imperialist-backed lies and destabilisation, human development remains at the centre of the fight for socialism in Latin America.