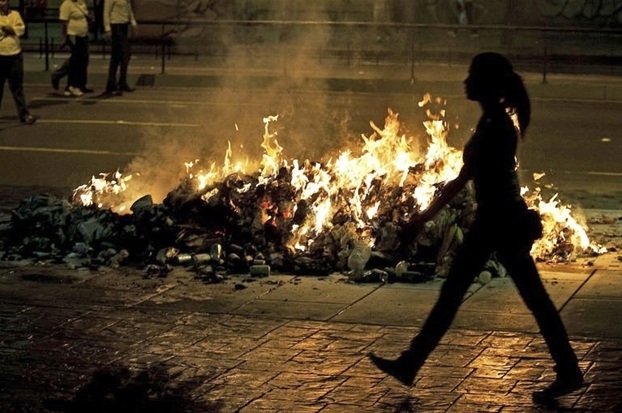 Following the allegation by prominent opposition journalist, Nelson Bocaranda, that Cuban doctors were participating in the burning of ballot papers, dozens of CDI (Integral Diagnosis health Centres) were attacked throughout the country.

Gangs of armed opposition thugs were roaming the streets of the main cities last night. Four Bolivarian supporters were killed as a result of the violence, some of them in drive by shootings, repeating a pattern we saw last week and on election day. PSUV offices were attacked in several states as well as the buildings housing Simoncito pre-school nurseries, Mercal and PDVAL state-run supermarkets and the Petrocasa housing program in Carabobo. The private homes of a number of state officials were also attacked. In the capital Caracas there were attacks against Telesur, La Radio del Sur and VTV state media buildings. (See some PICTURES here and HERE)

This is the real face of the so-called “democratic” opposition in Venezuela. They are attacking all the symbols of the social programs of the Bolivarian government, all the conquests of the revolution.

PSUV campaign coordinator Jorge Rodriguez as well as the new Venezuelan president Nicolas Maduro described these actions as a “developing coup d’Etat.” CNE president Tibisay Lucena rejected the blatant imperialist interference on the part of the OAS, the US and Spain. She added that an audit of 54% of the ballot boxes had been conducted, and that the final count of 100% of the vote slightly increased Maduro’s lead.

The Venezuelan elections have been free and fair and the voting system is fool proof. This has been ratified in several elections by institutions which are not suspicious of revolutionary leanings like the Carter Centre. The elections were observed by a range of international bodies, including UNASUR and the OAS, all of which have certified their clean and democratic nature. Even right wing governments like those of Mexico, Colombia and Chile, not known for their sympathies towards the Bolivarian revolution have recognized the result. Capriles himself accepted the results of the October 7 presidential elections, which were organized by the same CNE, with the same voting machines and with the same electoral register.

The bottom line is that the opposition lost the election and refuses to accept the result. The result was close, yes, but there have been other election results international with results which were even closer and these were not challenged. Capriles himself only won the governorship of Miranda in December last year by 40,000 votes and the PSUV accepted the results. Chávez lost the constitutional reform referendum in 2007 by a narrower margin, 1.4% and accepted the result.

As CNE head Tibisay Lucena pointed out, if the opposition wants to challenge the results, there are legal mechanisms to do so, instead of resorting to violence and not recognizing the official institutions.

What we see in Venezuela is an attempt to violate the democratically expressed will of the people. Venezuela has elected a president, albeit by a small margin.

We call on all progressive and democratic forces around the world to remain vigilant, to express their solidarity with the Bolivarian revolution, to denounce the undemocratic maneuvering of the opposition and imperialism, to counter the lies and manipulation of the mass media and to demand respect for the democratic will of the Venezuelan people.