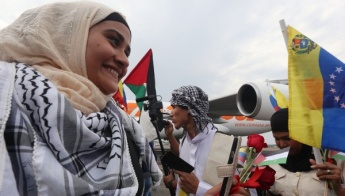 20 of the students are from Gaza, while the rest are from the West Bank. They were picked up in Jordan by a plane sent by the Venezuelan government, which had delivered a shipment of humanitarian aid for Gaza, the third of its kind since August.

The Bolivarian Revolution and the people of Venezuela have long been strong allies of the Palestinian cause and have stood in solidarity with the Palestinian peoples in the face of Israeli wars.

Maduro told the students he had cried with emotion upon seeing images of them dancing upon touching down on Venezuelan soil.

“We want to see you dance again,” said the president. In response, the Palestinians reassumed their dancing, and presented Maduro with a keffiyah, receiving the president’s jacket in return as a token of thanks.

”Today, Palestine enters to the heart of Venezuela," Maduro said.

The students will return home after their studies to provide medical attention to the Palestinian population, who are in desperate need of medical and other professionals after decades of Israeli assaults.

The Dr. Salvador Allende Latin American Medical School in Venezuela was inspired by the Cuban school that has trained thousands of doctors who provide medical attention to millions of people throughout the world.

The scholarship programme is named for Yasser Arafat, the former head of the Palestine Liberation Organization, and first president of the Palestinian Authority.

Earlier this year, the Venezuela also announced that the government would supply oil to Palestine and otherwise help reconstruction efforts in Gaza.