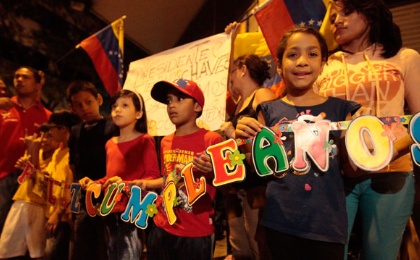 Nicolas Maduro attended an event at the Cuartel de la Montaña in Caracas, where Chavez’s remains are held. He then travelled to a remembrance event at Chavez’s birthplace in the rural town of Sabaneta in the south west of the country.

“Let’s give thanks to God for having given us a man as marvelous ascomandante Hugo Chavez…[and] for allowing us to accompany him in the struggle for the new independence and redemption of the homeland,” Maduro said to officials, supporters and international guests at the event in Caracas.

Maduro, a former trade union leader, also spoke of the need to “continue his [Chavez’s] work and keep being loyal to his project”.

In the Andean city of Mérida in the west of the country, VA.com covered an official act to mark the date. One attendee, a member of the “Hugo Chavez Vanguard” political collective, said, “Today we feel happy because Chavez hasn’t died, he’s still alive in Venezuela’s fiber”.

The activist, named Adriana Maya, also argued that for government supporters, “The task is to continue the struggle and implement the strategic points of the National Plan that Chavez left us”.