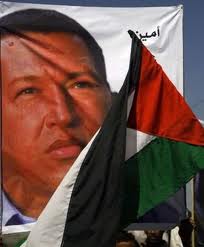 Socialist Latin American countries, in particular Bolivia and Venezuela, have regularly expressed support for Palestinians, exhibited in various diplomatic measures implemented against Israel. However, none have been as consistent as Chávez in denouncing the Israel occupation and imperial interests in the Middle East. In September 2011, Chávez penned a letter to UN Secretary General Ban Ki Moon, affirming the country's support for a free, independent and sovereign Palestine, stating, "The Palestinian cause represents a constant and unwavering will to resist, already written in the historic memory of the human condition". With references to the poetry of Mahmoud Darwish, Chávez declares the Palestinian resistance as directly linked to land, while explaining the politics of genocide also inextricably linked to imperialism, of which Israel is an ally.

Chávez had also vehemently denounced the enforced descent into oblivion disseminated by an intentional amalgamation of anti-Semitism and anti-Zionism. In the same letter, he stated, "I want to make myself clear: It is one thing to denounce anti-Semitism, and an entirely different thing to passively accept that Zionist barbarism enforces an apartheid regime against the Palestinian people. From an ethical standpoint those who denounce the first, must condemn the second."

Only Chávez went a step further than uttering simple condemnations. Following in the steps of Fidel Castro's anti-imperialist resistance, he exhibited a deep sense of internationalism evidenced by the consistent support towards the people of Palestine. In 2009, Chávez was the first Latin American president to recognise the State of Palestine. Following Palestine's status upgrade at the United Nations last year, Venezuela and Palestine established new agreements concerning health, education, culture and tourism, as well as the abolishment of visas for Palestinians wishing to travel to Venezuela. The agreements provided a concrete respite for Palestinians after the destruction inflicted by Israel during Operation Pillar of Defence.

Nicolás Maduro is clearly embracing Chávez's struggle for the rights of the oppressed and affirming Venezuela's support for Palestinians. In light of the recent developments in favour of Palestinians, it is perhaps time for Mahmoud Abbas to concretely distance himself from the Israeli demands of acquiescence and strengthen political alliances with countries which have experienced and battled imperialism, without resorting to a crippling economic dependence to ensure their survival.