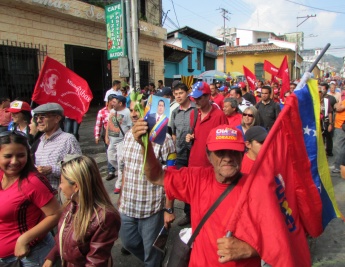 Venezuela has commemorated the one year anniversary of the death of former president Hugo Chavez with rallies across the country.

Supporters of the socialist president turned out in hundreds of thousands for official commemoration services, despite ongoing opposition protests.

In a show of force, in Caracas red crowds flooded the city centre for military and civil parades. Supporters of social programs launched under Chavez, along with social movements aligned with the government also rallied in the capital.

Rallies in honour of Chavez’s memory took part across the country. In the Andean city of Mérida, several thousand marched to the central Plaza Bolivar. They chanted slogans such as “Chavez lives, the struggle goes on” and “this government will continue”, in response to the opposition marching chant “this government is going to fall”.

Commemorations are set to continue tonight, including the premiere of a new documentary by Oliver Stone on Chavez's life. Titled “Mi Amigo Chavez” (My Friend Chavez), the documentary will air on TeleSUR tonight.

Chavez's successor, President Nicolas Maduro described the late head of state as representative of the “greatest democratisation of political life in the 200 years of the (Venezuelan) republic”.

“Never before in history was there a leader who authentically loved the people, who loved the humble and respected the poor,” he stated.

“It was a vindication of the poor and the workers, their rights, their education, culture and dignity,” Maduro stated.

However, elsewhere in the capital, opposition demonstrations continued, with barricades continuing to block sections of the city's wealthy east side.

Roadblocks began as early as 5 am in some parts of the capital, with burning garbage being used to bring morning traffic to a halt in some areas.

Non-governmental prison monitor Foro Penal estimates that over one thousand people have been arrested in connection to the disturbances, including 47 on Monday. Most are released shortly after arrest, sometimes on bail conditions. Along with peaceful protests, Venezuela has also seen a slew of violence and vandalism.

Despite the ongoing disturbances, yesterday the education minister Hector Rodriguez called for academic institutions including schools and universities to re-open, after a six day holiday for carnival celebrations. He denied rumours that classes would be suspended for an extra day as part of today's commemorations.

“Venezuela is having a battle for stability,” Maduro stated. He also hit out at the United States, accusing Washington of interfering with Venezuela's domestic affairs.

“I will respond with strength and force to any attempt by any American government to meddle in the internal affairs of Venezuela,” the president said.

Yesterday, Maduro came under renewed criticism from Washington, with the House of Representatives passing a non-binding resolution condemning his government's handling of the disturbances.

The resolution accuses the Venezuelan government of disregarding the “rule of law”, “inexcusable violence perpetrated against opposition leaders and protesters in Venezuela” and using “politically motivated criminal charges to intimidate the country's political opposition”.

The resolution expresses support for anti-government protesters, some of which have staged violent demonstrations in Venezuela's major cities. On the same day the resolution was passed, opposition demonstrators in Caracas attacked a group of journalists.

The resolution was passed with only one dissenting voice, and a similar resolution is being considered in the Senate.

Yesterday the right-wing think tank The Heritage Foundation called for the US to protect human rights in Venezuela by enacting new “targeted sanctions”, appealing to the Organisation of American States (OAS) and “approving the Keystone XL pipeline, and preventing federal regulations on hydraulic fracturing”.

However, some of Venezuela's regional allies accused Washington of exacerbating tensions in Venezuela and Latin America.

“Any external interference [in Latin America] cannot be accepted...these problems are promoted by the US,” the Bolivian president stated.