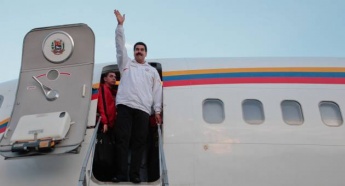 In a diplomatic statement emitted today by the United States Embassy in Caracas, the U.S. denied prohibiting the Venezuelan president’s passage through its airspace, and blamed any delays in granting passage on the Venezuelan government for not “properly submitting” the flight request.

The statement said that Venezuela had only submitted the international flight request with one day’s notice, when three are required. Further, the U.S. diplomats argued that approval was delayed because “the [presidential] plane in question was not a state aircraft, which is required for diplomatic clearance”.

“We advised Venezuela on the correct way to get the clearance and notified their authorities last night that permission was granted,” the statement read.

Venezuela’s top diplomat in Washington, Calixto Ortega, rejected the U.S. version of events, affirming in a call to state channel VTV that the U.S. had indeed denied Maduro’s passage through its airspace.

“The permission was denied. I have the denial in writing. We had to have a series of conversations [to gain clearance for the flight],” he said.

Ortega also disagreed with the arguments put forward for the delay in granting permission to enter U.S. airspace, explaining that the plane, route and flight request were exactly the same as in June when Maduro passed over Puerto Rico en route to Italy for a diplomatic tour of Europe.

“It’s the same plane, with the same crew, and exactly the same route made, [and in June] a permission request [was] immediately approved,” he explained.

The Venezuelan diplomat argued that Venezuela would need to keep “very aware” of the possibility such moves by the U.S. in the future, saying that “they took us by surprise”. He also criticised press in Europe for favouring the U.S. version of events in the dispute.

In addition, Ortega voiced concerns that the U.S. would repeat last night’s action next Wednesday 25 September, when Maduro will travel to New York to attend the United Nations General Assembly meeting.

Venezuela has further accused the U.S. of denying visas to members of its delegation to the U.N. gathering.

In the letter, Moncada accused the U.S. government of “deliberately delaying the approval of entry permits” to members of Maduro’s diplomatic team, and of trying to “create logistical barriers…to his [Maduro’s] visit”.

U.S. State Department spokesperson Marie Harf denied the accusation, stating to journalists, “No visa has been denied to the Venezuelan delegation to the United Nations General Assembly this year”.

The apparent denial of President Maduro’s request to fly through U.S. airspace has generated criticism from Venezuela’s regional allies.

Bolivian president Evo Morales requested an “emergency meeting” of the Community of Latin American and Caribbean States (CELAC), saying that he would propose that all member states of the bloc withdraw their ambassadors from the U.S. in protest. CELAC brings together every state in the Western Hemisphere with the exception of the U.S. and Canada.

Rodriguez said that CELAC member states were discussing the issue, and would bring it up at the U.N. General Assembly meeting. Cuba is currently the pro tempore president of the CELAC.

Further, this week Brazilian president Dilma Rousseff cancelled her scheduled state visit to the U.S. in October, apparently due to concerns over the U.S. spying activities toward Brazil revealed by Snowden’s leaks.

Venezuelan relations with the U.S. have remained distant, and the two countries have not had an exchange of ambassadors since 2010. The brief attempt to improve relations following Maduro’s election in April was brought to a close by Venezuela in July, after the U.S.’s new ambassador to the U.N. made “unacceptable and unfounded” comments about the Venezuelan government.