In the last week, there have been several denunciations and accusations in Venezuela in the lead up to the presidential elections this Sunday 14 April. Nicolas Maduro, the candidate of the Bolivarian Revolution, is widely regarded as holding a 10-20 point lead over the opposition's MUD coalition candidate Henrique Capriles. Below are some excerpts from articles published on www.venezuelanalysis.com 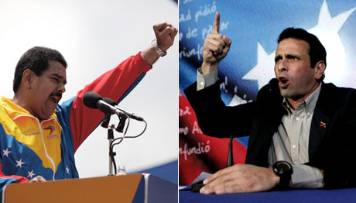 Venezuelan government officials released a recorded conversation on Saturday6 April that allegedly reveals the use of “mercenaries” by the Venezuelan opposition to create chaos in the lead up to elections next Sunday.

Interim President Nicolas Maduro made the announcement at a campaign event on Saturday, assuring that the group of “mercenaries” were already in Venezuela, and are seeking to carry out three objectives before next week’s elections: sabotage the electrical grid, increase the number of murders in the country, and assassinate Maduro.

“From Central America we have gotten information that a group of mercenaries has entered the country, with coordination from the Central American right-wing and some sectors linked to the opposition candidate,” he said.

Maduro said that US officials Roger Noriega and Otto Reich were behind the plan, together with right-wing sectors from El Salvador and Venezuela, and had paid the “mercenaries” to kill him.

“They want to kill me because they know they cannot win the elections on April 14th,” he said.

Shortly after Maduro made the accusation, Foreign Minister Elias Jaua appeared on news channel Telesur to give more details.

“Through our intelligence agencies, we have recorded conversations among right-wing groups where they discuss using Central American mercenaries to carry out destabilization plans in the country,” he said.

Jaua explained that the groups involved are led by a retired colonel of the Salvadoran armed forces, David Koch Arana, who is allegedly linked to Cuban terrorist Luis Posada Carriles, and the operation is coordinated by Salvadoran right-wing politician Roberto d’Aubuisson.

In a recorded conversation between d’Aubuisson and Koch Arana, vague plans are discussed to engage in activities inside Venezuela, and the conversation would also seem to implicate the Capriles campaign in the plans.

Jaua read a portion of the dialogue that allegedly took place between the two individuals, which went as follows:

Roberto d’Aubuisson: “How are things going down south? You haven’t given me the reports…. Are the reports we are sending you useful?”

David Koch Arana: “I have the reports, but I haven’t sent them to you yet… Supposedly they have informed the Venezuelan government that there are foreigners interfering in the political situation. Capriles has managed to find safe places so that our people can chill. The team already arrived and they are working together. One group is already working in the streets to disorient the vote.”

Roberto d’Aubuisson: “Did you tell them that it should be like we worked in the campaign here? Just be careful. Remember that they have offered their support if they win, and that would be good for us. I don’t know how the other groups that we sent from here are working, but I hope they don’t clash with each other or have conflicts, because they don’t know each other. I will talk to them to see how we should organize the operations there.

Jaua said that the full audio of the conversation would be made publicly available in the coming days.

On 4 April, Interim President Nicolas Maduro yesterday ordered the Venezuelan military to protect power plants against what he claimed are attempts to sabotage Venezuela’s electricity system ahead of next week’s presidential election.

The move was ordered in a meeting with government ministers, military commanders and electricity board authorities, following a set of power outages in Caracas and Aragua state on Wednesday considered to be suspicious.

There has been an increase in power outages in Aragua state in recent weeks. Yesterday morning, authorities of the state-run National Electricity Corporation (Corpoelec) found eleven burned transformers throughout the state. The head of Corpoelec in Aragua state, Antonio Lucas, has been dismissed.

The Corpoelec national president, Argenis Chavez, also argued yesterday that the recent spate of blackouts were due to attempted sabotage.

Referring to a recent power cut during a Maduro campaign event, he said, “There’s nothing to indicate that there was a [conventional] failure, its sabotage”.

“It’s not a secret to anyone that inside the structure of the electrical system there are [harmful] elements: thank God every day there are less workers who answer the right-wing call to commit sabotage; but there is internal and external sabotage,” he said in an interview with public channel VTV.

Argenis Chavez, who is late President Hugo Chavez’s brother, added that the number of blackouts in Venezuela also increased before the presidential election last October, suggesting a political motive behind presumed attacks against Venezuela’s electrical system.

Nevertheless, the Corpoelec president argued that authorities had strengthened measures to protect the electrical system in the run-up to the election, and that “on 14 April, the national electrical system will function perfectly”.

Partly due to falling poverty and rising consumer spending power, electricity consumption has risen sharply in Venezuela over the previous decade. The government claims to have increased production above demand – 20,000 megawatts produced to 19,000 megawatts consumed – however concedes that problems in transmission sometimes lead to sporadic outages in some parts of the country.

In his interview yesterday, Argenis Chavez defended the government’s investment record in the electricity system since it was nationalised in 2007. He also reported that since taking on the temporary presidency last month, Maduro has approved $5 billion bolivars and US $700 million to continue expanding the national electricity system.

On 9 April right-wing candidate Henrique Capriles said that he will not sign a National Electoral Council (CNE) document to guarantee that he would recognise the results of the 14 April presidential elections.

The document, requested by the government and written by the CNE, called ‘Commitment with Democracy’ was signed by pro-Chavez candidate Nicolas Maduro, as well three other candidates. Candidate Reina Sequera didn’t sign the document today because she wasn’t in Caracas. A similar document was signed by all candidates, including Capriles, for the 7 October presidential elections in July last year.

Instead, a representative for Capriles’ campaign, Carlos Vecchio, handed in a different document signed by Capriles, where he committed to “respect the popular will” but demanded that the interim president Nicolas Maduro “cease his abuse of the use of public resources to promote his candidature”.

In the document he also accused Maduro of “intimidating public servants” and “taking advantage of the needs of the poor... in order to bribe them with the delivery, or not, of social missions, and in that way, obtain their votes”.

He called the CNE “negligent” and warned that “we will be vigilant before...any alteration that is attempted on the electoral results”. Further he suggested that the electoral power is biased towards the government.

The move by Capriles follows weeks of  opposition and private Venezuelan media attacks on the CNE, as well as a small protest in Caracas calling for “fairness and transparency” in the elections.

US Assistant Secretary of State, Roberta Jackson, also said last month that it would be “difficult” to have “open, fair and transparent elections” in Venezuela.

Maduro signed the CNE document while at a workers’ rally, saying, “I’m going to sign it in name of peace for the country, and respect for the people. This signature is worth my own life. I’ll respect the results that the people decide on 14 April. I swear it before God, I swear it before the people, and I swear it on the memory of Hugo Chavez”.

The CNE completed its auditing process today, where all aspects related to the voting act were verified. Assessors from the Central University of Venezuela, technical experts from all candidates’ campaign teams, and the electoral mission of the Union of South American Nations (UNASUR) were all present.

CNE president Tibisay Lucena announced that the electoral system is “safe and ironclad” and said the council had not found the irregularity denounced by the opposition serious, where a member of the governing United Socialist Party allegedly had the code to the electoral machines.

“The code is a general one, not only do the CNE technicians know it, but also over 90 contracted personnel... that is, it is not a code that implies infringement of electoral security”.

She also highlighted that participation in elections has grown progressively in Venezuela, which “is proof of the enormous credibility of the [electoral] organism”. 81% of registered voters voted last October.

46,000 voting machines are being sent to voting centres such as schools, which as of Wednesday will be closed and protected by soldiers as part of the Republic Plan. 80,000 CNE assistants have been trained to operate the machines.