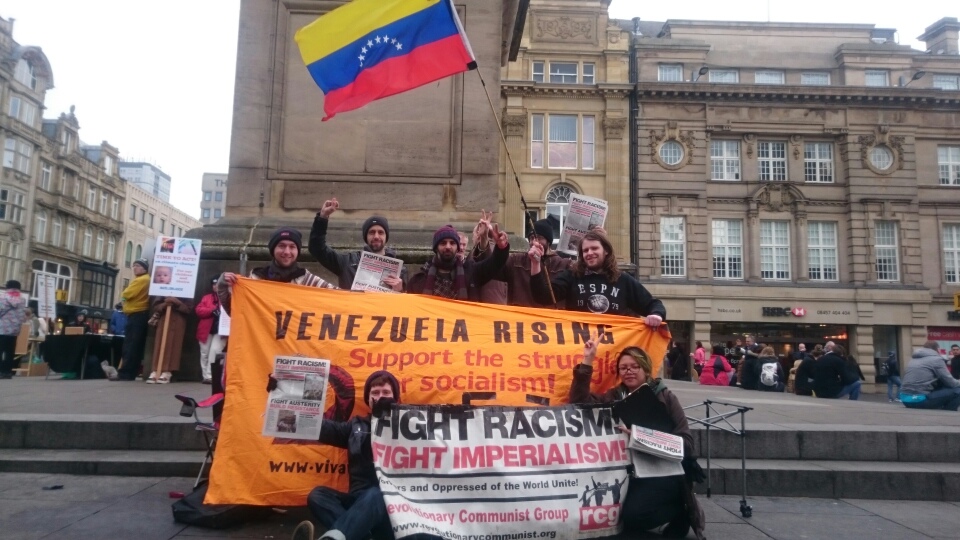 Activists from the Revolutionary Communist Group, Britain, held a street meeting on 7 March in Newcastle upon Tyne as part of an International week of solidarity with Venezuela called by Los Pueblos con Venezuela

Capitalism is in crisis - cuts for the poor, bailouts for the rich, squeezing out profits as governments impose privatisation and austerity across Europe whilst intensifying exploitation war and occupation of underdeveloped countries in a scramble for resources. Humanity is at a cross roads, the choice is stark – build socialism or face never-ending austerity, racism and war. The Bolivarian Revolution in Venezuela demonstrates what can be achieved when people take a stand against austerity and imperialism!

During the 15 years of the Bolivarian Revolution, Venezuela alongside Socialist Cuba has been at the forefront of regional integration, contributing to healthcare, education and mutual development projects across Latin America, opposing neo-liberalism and private profit. This defiance has brought Venezuela into the cross hairs, today the inspiring achievements of the Venezuelan revolution are threatened by a violent, right-wing opposition backed and directly funded by US and European interests to the tune of $90 million.

Venezuela, alongside socialist Cuba is spearheading a movement for socialism across Latin America, challenging imperialism and neo-liberal exploitation, demanding dignity and human development over profit and private interests. Venezuela remains a beacon of hope and inspiration for movements across the globe.Hands off Venezuela! their fight is our fight- Break the media blockade!