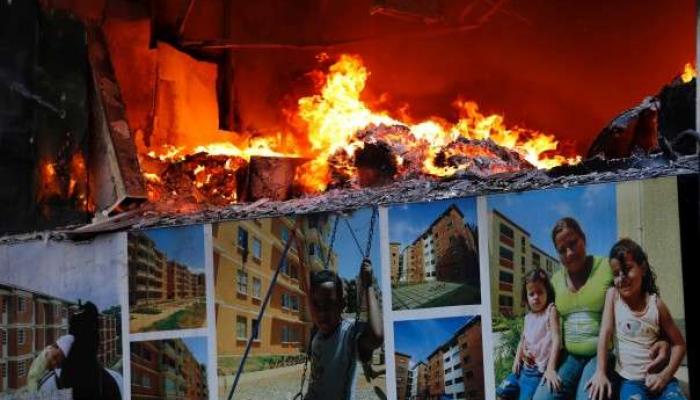 Western media outrage varies with the circumstances and is not applied universally. Indeed, the press maintains a surprising silence when other countries impose draconian measures for considerably less severe disorders than those that have occurred in Venezuela.4

The case of France is revealing. On October 27, 2005, following the accidental death of two teenagers pursued by the police, urban riots broke out in certain Paris suburbs and other major cities around the country. The extent of the violence -- which did not result in a single death -- was less than what has occurred in Venezuela in recent weeks.

However, on November 8, 2005, President Jacques Chirac declared a state of emergency throughout the country and imposed a curfew, both of which remained in force for several months. These were actions permitted under Decree 2005-1386, an April 3, 1955 law that had been adopted during the war in Algeria, legislation that had not been used since 1961. The law allows for the suspension of constitutional guarantees and seriously undermines civil liberties because it "prohibit(s) the movement of people," "establish(es) protected areas where the security and length of stay of individuals can be regulated" and, "in territorial circumscriptions or specific regions, allows for house arrest of individuals residing in an area established by the decree." 5

Similarly, "the Minister of the Interior, for the entire territory in which a state of emergency has been declared, in conjunction with the prefect of the Department, may order the temporary closure of theatres, pubs and bars, indeed of meeting places of any kind as determined by the decree provided for in Article 2." These authorities are also empowered to "ban meetings that are deemed likely to cause or encourage disorder." 6

The law of April 3, 1955 confers to the "administrative authorities referred to in Article 8 the power to order house searches by day or by night" and empowers "the same authorities to take all necessary measures to ensure control of the press and publications of any kind as well as radio broadcasts, film screenings and theatre performances." 7

This legislation also empowers military justice to replace the civil justice system. Thus, authorities "may authorize military courts to judge crimes and related offences that otherwise would have been responsibility of the Assize Court of the Department," thereby undermining the jurisdiction of national common law. 8

To justify such measures, measures that contravene the European Convention on Human Rights (ECHR), Paris had relied upon Article 15 of the ECHR, which authorizes, "in time of war or public emergency threatening the life of the nation," the suspension of obligations to which France had subscribed. 9

At no time has Venezuela -- struck by far more serious violence than what occurred in France in 2005 -- declared a state of emergency, suspended constitutional guarantees, infringed civil liberties or imposed military justice at the expense of civil justice.

A more recent example is equally illustrative. Following the riots of August 14, 2012 in the city of Amiens, which caused significant property damage (a school and several public buildings were burned) and injured 17 policemen, the French justice system severely punished the perpetrators of these crimes. Six people were sentenced to prison terms ranging from one to five years in prison without the possibility of parole. 10 The juvenile court of Amiens sentenced five teenagers, aged 14 to 17, to prison terms ranging up to 30 months. 11

It would be easy to continue citing examples. When the New York police arbitrarily detained over 700 peaceful demonstrators who had been brutalized by the police, the Western media carefully avoided accusing the Obama administration of violating human rights. 12

Similarly, when the Brazilian police violently cracked down on peaceful protesters in Sao Paulo, arresting some 262 people in a single day as well as assaulting several journalists, the media did not question the democratic legitimacy of President Dilma Rousseff. 13

Western media are incapable of being impartial when it comes to interpreting complex Venezuelan reality. The charter of journalistic ethics is systematically flouted by a press that refuses to fulfill its duty to provide truthful information and chooses instead to defend a certain political agenda. This agenda flies in the face of the basic principles of democracy and goes against the will, expressed repeatedly at the polls, of the Venezuelan people.

Translated from the French by Larry R. Oberg.