Published on 6 March 2015 by TeleSUR English

The 4th extraordinary summit of the Petrocaribe bloc of nations closed in Caracas, Venezuela on 6th March. 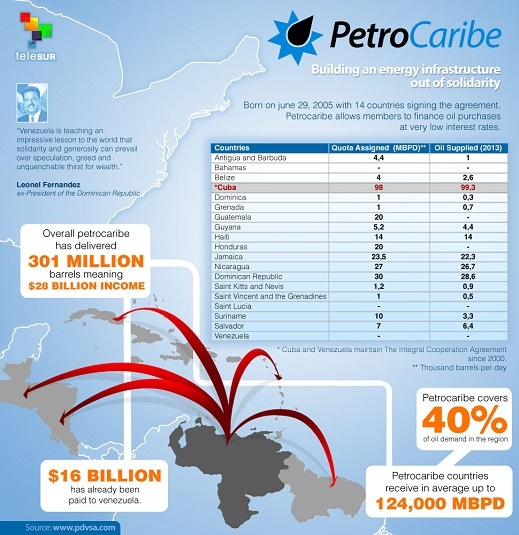 The summit, attended by 17 delegates from member states, generated several important decisions for the Caribbean bloc’s future, one of which was the decision to create an economic zone, and another was a focus on regional peace: “We reaffirm that the Caribbean is peaceful region, where member states promote integration processes and friendship, to keep guaranteeing the greatest amount of happiness for our people.” The final decisions of the bloc affirmed that “the founding spirit of Petrocaribe is to be a mechanism of solidarity, cooperation and friendship between the peoples of our region."

Initiated as a pact to assist in the economic and social development of countries in the region, Petrocaribe is primarily an effort to alleviate the economic dependence experienced by many small developing countries in the Caribbean and Central America. Petrocaribe is the brainchild of the late Venezuelan President Hugo Chavez, who understood that social and economic development in lower income countries of the region was hindered by the need to spend on an indispensable resource – oil.

Launched in 2005, Petrocaribe allows member countries — currently totaling 19, including Venezuela — to purchase oil from Venezuela under preferential terms. Member countries need only pay 60 percent of the cost of oil up-front, and the remaining 40 percent can be paid over a period of 25 years at an interest rate of a mere 1 percent. PDVSA, the Venezuelan state oil company, currently provides 100,000 barrels of oil per day to member countries, and since the creation of Petrocaribe, countries have received over 230 million barrels of oil under the initiative.?

Working to Improve the Lives of Millions

The motivation behind Petrocaribe, however, goes beyond the provision of economic benefits. One of the aims of the Bolivarian Revolution was to return control of Venezuela's natural resources to the people so that the income generated could be spent on the needs of the majority, instead of a small, privileged elite. This kind of thinking does not only apply to domestic policies, but also outside of Venezuela's borders. The savings provided through the Petrocaribe initiative to member states allows these countries to spend more on social development projects. The breathing room that Petrocaribe provides lower income countries has resulted in a marked improvement in the quality of life of the residents of member countries. As an example, Petrocaribe funds have provided for the building of important infrastructure projects in Guyana and funding for social programs in Saint Lucia. In addition, Petrocaribe also established the ALBA Caribe Fund, which funds development projects in member states and so far has funded 69 social welfare projects to the tune of US$106 million.

Even sectors that are at odds ideologically with Caracas defend the initiative. Honduras rejoined Petrocaribe after private sector oil interests expressed their support for the initiative. Many member countries are headed by right-leaning or right-wing governments, a clear indication that the initiative enjoys widespread support. Critics of the Bolivarian Revolution have been attempting to undermine the success of Petrocaribe by claiming that the drop in the price of oil on the international market will spell the end of the initiative. Venezuelan President Nicolas Maduro has been expressly clear that his government stands firmly behind the initiative and it is not at risk of ending.

Alternative Compensation Mechanisms Petrocaribe has also transformed the way in which member countries trade with each other. The Venezuelan government allows part of the costs to be repaid through the bartering of products and services. The most widely known example of this is in the case of Cuba, which sends doctors to Venezuela who provide medical services to people who previously did not have access to one. But other countries use this mechanism to pay through provision of goods. For example, Jamaica provides clinker, a cement component. Guyana provides rice crops. And Nicaragua pays with milk products, meats, coffee, sugar, and cattle.

Toward an Economic Zone

In November 2014, the Petrocaribe member countries' foreign ministers met with their counterparts from the ALBA, CARICOM and MERCOSUR regional blocs to discuss regional integration, and decided to create an economic zone among these three groups of countries. For now, efforts to integrate ALBA and Petrocaribe into an economic zone have been led by the government of Ecuador.

However, the idea is to incorporate Mercosur in a future stage. “We shield ourselves to fight against hunger, fighting for health and education, for an equitable development, fair and complementary to all the nations that are part of this efforts,” explained President Maduro. The member countries hope that by creating the economic zone tourism, commerce and productive chains among countries will increase.  Through the transformation of Petrocaribe, ALBA and Mercosur into one economic zone, member countries hope to create a new productive model which is based on and will reinforce peace and stability in the region.