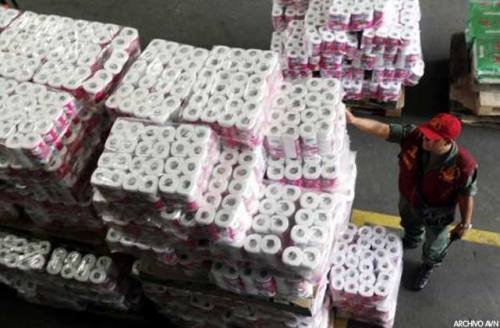 President Maduro's success in combatting sabotate is largely due to citizens reporting incidents to the various levels of government organized for this purpose as noted at the end of the article. This is known as Gobierno de Calle (Government in the Street), the second phase of President Maduro's program to defeat the US-backed attack on the Venezuelan economy, introduced last month.

The news report (below) on the confiscation of the goods hoarded by the Don Baglio market for sale in publically-owned markets serves as only one of many examples of  actions taking place daily across the country. In our view, every one of these private entities should be nationalized and converted into publicly-owned markets with the criminals prosecuted to the extent the constitution allows. (translated by Axis of Logic).

Monday, October 21, 2013 - Over 3800 rolls of bathroom tissue, 440 litres of powdered milk and 1560 litres of long-life liquid milk were taken by order of the Public Prosecutor for being allegedly hidden in a warehouse of the Don Biagio Mini Market and Super Express, located in Maracaibo, Zulia state.

It was determined that the products they were absent from the shelves in spite of being stored in the warehouse, by restricting consumer access to these foods.

The establishment where the goods were found was not identified by name or RIF (commercial registration), however, the property serves as a warehouse of goods and food from the store aforementioned.

These offenses are being stopped via reports to the legal representative of the trade and the Public Prosecutor.

In addition, the goods seized shall be put up for sale at fair prices in the markets Fundación Mercados de Zulia (Fundamercado), the organization in Zula that facilitates the marketing of products directly to the people.

These actions were carried out by the audit staff of the SuperintendenciaNacional de Costos y Precios (Sundecop) and El Instituto para la Defensa de las Personas en el Acceso a los Bienes y Servicios (Indepabis) as part of the actions undertaken by the National Government for the fight against shortages and hoarding.

During the last few weeks, the upper body to the Órgano Superior para la Defensa Popular de la Economía (Defense of the People's Economy) has referred more than 25 people to the Attorney General's office for engaging in wrongful acts that infringe on the sovereignty and food security of Venezuela.

The prosecutor for Indepabis (consumer protection agency) stated, "We will give continuity to due process and the representation and the right of defense to the representatives of the establishment."

This inspection (in Zulia) was attended by the National Guard and prosecutors of the Bolivarian Seniat (customs and tax service), in addition to the participation of Decandido, the Bolivarian Trade Union of Supermarket Workers.

"We are involved with the supervisory bodies, we support their actions, we carried out training and intelligence work to detect establishments such as these, where the goods are heartlessly located," said Gustavo Chains, representative of the union.

The complaints by users is the most important information that the agencies as Sundecop, Seniat and Indepabis, and others noted.

That is how the proceedings and audits of the upper body respond to the economy thanks to the information of the People's Power on the basis of complaints received through 0800-Sabotaje (72268253), 0800-Sundeco (7863326) and the Twitter account @Sundecop.