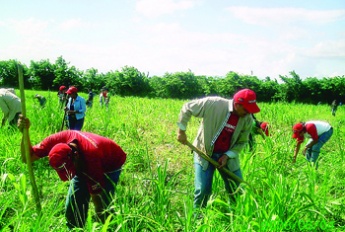 State-owned newspaper Correo del Orinoco reports that further details are forthcoming, including the manner in which agricultural producers can register to take part in the new distribution methods that are equally aimed at guaranteeing markets for their crops.

The council was launched to combat food shortages and speculation but, Maduro said, it forms part of a broader strategy to increase production and improve nutrition in Venezuela. “Our formula is to plant productive capacity in our country, not only in the countryside but in the city too... so that it permits us to climb and climb towards an optimal food situation.” He also noted the importance of the Ministry of Nutrition's public education campaigns to discourage Venezuelans from eating junk food.

Maduro called upon state-run dairy company Los Andes to set the example; “We have no explanations to why we are not producing at the highest capacity. Whatever is needed, ask me for it, but let's take Los Andes Dairy to the maximum productive level.”

Luis Moreno Sevilla, the recently ratified president of Los Andes will continue on to oversee the company's expansion and increased production.

As a part of the recent government shake-up, the Corporation of Suppliers and Agricultural Services (CASA) has also been placed under the new Ministry of Foods. Maduro concluded Sunday’s address by affirming “if there is any revolution that our country should make, it is a productive revolution in the countryside of Venezuela.”