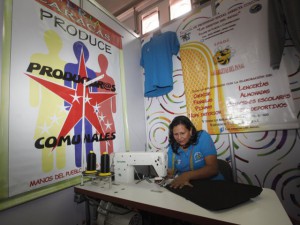 On Tuesday 16 September, President Maduro announced the creation of the Communal Development Bank and the Presidential Council of Popular Communes as a new structure to bolster local popular power. Through the Communal Development Bank, he allotted resources to communes throughout Venezuela to increase agricultural production.
Following the recent “shake-up” in Venezuela, President Maduro proposed a further restructuring of government institutions during his television show “In contact with Maduro” on Tuesday night. He proposed the formation of a Bank of Communal Development of Venezuela which would fuse together all of the existing development banks under one umbrella, in hopes of more efficiently distributing resources throughout the country.
Under this new model, The Women's Development Bank (Ban Mujer), The People's Bank (Banco del Pueblo,) the National Fund of Communal Councils (Safonacc) and the Development Fund of Microfinancing (Fondemi) will all operate under the auspices of the Bank of Communal Development (Safonapp). This change would move away from providing individual loans, and instead grant and lend resources to community-managed projects organized through communes or other forms of collective civic associations.
Maduro stated that the new Communal Development Bank would work "as an autonomous decentralized service, and also have the authority for the administration and granting of financial and non-financial resources, capital goods and inputs assigned to communes, community councils, social movements, and other popular power grassroots organizations for the execution of communitarian socio-productive projects that contribute to the communal economic system.”
Maduro reiterated an emphasis on strengthening communal power through “a true revolution within the revolution” which he described as “the force of an organized people governing.” To this end, Maduro fleshed out plans for the new Presidential Council of the popular government of the communes, which will function as a new structure for decision making within Venezuela.
The Presidential Council of Communes will be composed of three branches representing the presidential council, the state and the communes – each will send respective spokespeople and the body as a whole will also incorporate a plenary council composed of one spokesperson from each commune throughout Venezuela. Terms will last one year and they will be rotating.
These new institutions and structures are aimed at supporting and strengthening communal power in Venezuela by providing new avenues of participation in both political and economic venues.
Maduro announced the allotment of substantial resources to the Commune El Maizal for creation of a food production factory, to the Agua Sagrada Terepaima Commune for an irrigation system and to the Juan Sabas Peralta Commune to purchase equipment to maintain agricultural roads. All of these communes are in the state of Lara. However, resources were also granted to communes in the states of Delta Amacuro, Yaracuy and Barinas.
Diverting federal resources towards agricultural production projects managed by communes is a policy designed to target two of the major problems facing Venezuela today; food shortages due to the economic war and low levels of production, and corruption marked by mismanagement of funds. These policy changes also elevate the importance of the commune, not only as a model for popular participation and organization but now, as a vehicle for economic production and decision-making at a national level.
Analysis: Venezuela's Economic War and Big Agribusiness
In the face of food shortages, fueled by an ongoing economic war, many Venezuelans have pointed to the need to increase domestic food production. Big agricultural business and food importers have come under fire from the public for the amount of control they exercise over the distribution of food in Venezuela, and recent scarcity issues have underlined a need to transform how food is produced and distributed in the country.
The government says long-term strategy to counter the power of big business is to increase production in Venezuela, reduce Venezuela's reliance on food imports, and work towards food sovereignty. The Venezuelan government has advanced different strategies for bolstering production, but has had mixed results. In 2005, there was a marked boom in the number of registered cooperatives, after the government offered credit, training, and other forms of support. Very few of the newly formed cooperatives survived the economic crisis of 2008, and the government quickly refocused on socialist enterprises, in which large scale industry would be owned by the state, instead of workers.
In the face of some failures with the socialist enterprises, the new model being advanced by the government is the Networks of Free and Associated Agricultural Producers (REPLA). This model is rooted in supporting a variety of localized forms of production, be it cooperative, private, public. This new form does not promote any particular rigid form of organization nor ownership, it is designed to provide support in the form of credit, loans, equipment, training, and assistance with getting agricultural goods to market. Essentially, the government is prioritizing the production and distribution of food in Venezuela without outlining a cookie-cutter or dogmatic model of organization or ownership.
In the face of doomsday headlines about the Venezuelan economy and beneath the many acronyms and government ministries that are being charged with the guiding Venezuela through this next step, the revolutionary policy priorities in Venezuela are straightforward: increase food production and create mechanisms for equitable distribution of that food, and bolster the communes as an engine of political organization, and economic development.
Maduro emphasized these priorities during his television program on Tuesday, “but now we are going to develop a new economic model, a new social model, where you are living, compatriot, in your community, where your family is. The new economic model will be linked to schools, high schools, it's to make a new Venezuela and a new revolutionary process. The credits (loans) will continue, but now we will orient them towards the concept of communal socialism.”