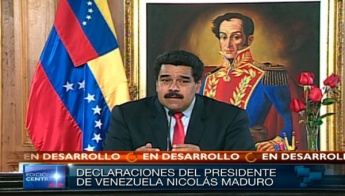 The first revolution that Maduro outlined is the economic revolution, promoting production, "in order to guarantee stability".

"All the efforts of the government should be concentrated on this, to make this revolution successful," he said.

The missions are the third revolution.  Maduro emphasized their importance in "building socialism, creating the new society, where social rights and life are guaranteed."

The fourth revolution involves state policies and "creating a new state, one that´s really democratic, one that´s about justice, and  rights." It aims to transform all governmental structures, and end with what "remains of the bourgoise state." Maduro emphasized the importance of the fight against corruption.

In this fourth revolution he also announced a range of new ministers and structures.  Maduro announced a timeline for social movements to elect "popular presidencial councils", including for communes, women, youth, culture, and workers. Elections will be held during September and October.

In terms of the new ministries, they will be restructured, with some combined, and many falling under "vice-presidencies". The vice-presidency of economy and finances, for example, will group together six ministries. Of these, the minister for petroleum will no longer be Rafael Ramirez. Ramirez will now be the foreign minister. Isabel Delgado is the new minister for trade, Jose Cabello for industry, Giuseppe Yoffreda for transport, and Jose Berreteran for agriculture. Andres Izarra will remain as minister for tourism. There will also be a vice-presidency of security and food sovereignty. The ministries of higher education and the ministry of science and technology will be combined, and headed up by Ricardo Menendez.

Maduro said the fifth revolution was one of "territorial socialism". He explained that it was about consolidating the communal model, and creating a "new eco socialist model".