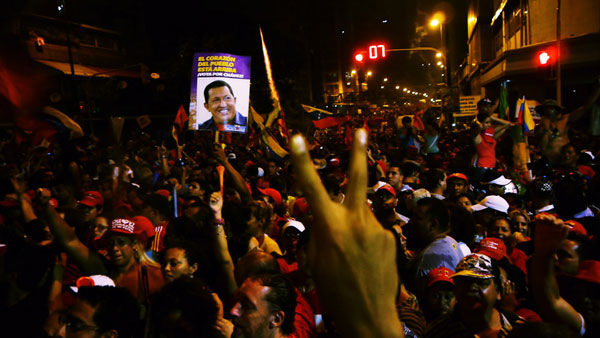 [RCG 05.03.13] The death of Venezuelan President Hugo Chavez from complications following surgery for cancer, is a huge loss to the revolutionary movement worldwide, and the Revolutionary Communist Group and Fight Racism! Fight Imperialism! joins with the people of Venezuela in mourning the loss of a great socialist leader.

Hugo Chavez was first elected to power in 1998, following a military coup in 1992; elected again in 2000 under the new, progressive constitution of the Bolivarian Revolution. In 2002 a US-backed coup against him was defeated as working class Venezuelans poured out of the barrios in their hundreds of thousands to defend their president. He was re-elected as president with sweeping majorities in 2006 and again in 2012.

Hugo Chavez was a political giant, under whose leadership of the Bolivarian Revolution and vision of ‘socialism for the 21st century’ the lives of ordinary working class Venezuelans were transformed. In the last ten years, Venezuela has achieved the lowest levels of inequality in the region (excluding Cuba); it has wiped out illiteracy, brought infant mortality down from 25 per 1,000 to 13 per 1,000 live births, slashed levels of extreme poverty, provided free health care and education for all, built hundreds of thousands of units of social housing and ensured that – unlike in Britain – no child goes to school hungry in the morning. Chavez built anti-imperialist alliances, first with Cuba and then, through ALBA and other trade and cooperation treaties, more widely across Latin America and the Caribbean, to challenge the hegemony of the United States and begin to create a new anti-imperialist bloc on the world stage. On the international stage, he challenged the hypocrisy and brutality of a world dominated by the interests of imperialism.

Inevitably, he has attracted the unswerving hatred of Venezuela’s middle classes and their backers in the US and Europe; the vitriol of the international bourgeois press has been relentless. The vultures of reaction have been circling ever since the seriousness of President Chavez’s condition was made public, with counter-revolutionary forces attempting to foment the destabilisation of the Bolivarian Revolution. They perpetrate the big lie - that without Hugo Chavez there can be no Bolivarian Revolution – that it lives or dies with him. Nothing could be further from the truth. Despite the mass popular support, admiration and indeed love Chavez enjoyed as the living embodiment of the aspirations of the Venezuelan people, the Bolivarian Revolution has never been about just one man. It is a revolution being built from below, by the conscious organisation of the Venezuelan working class to transform society from one of neoliberal exploitation, hunger, sickness and poverty for the majority, to one moving towards collective, socialist organisation and production.

The Venezuelan people will not allow these vital gains to be lost. The tremendous popularity of the governing PSUV was demonstrated again in December’s regional elections, where the party won 20 out of 23 states. Under the stewardship of vice-president Nicolas Maduro and National Assembly leader Diosdado Cabello, Bolivarian revolutionaries in their own right, the Venezuelan government has begun to implement the Programa Patria manifesto on which Chavez was elected, ‘developing socialism beyond the point of no return’. The battle lines are drawn as the Venezuelan people prepare to fight tooth and nail to defend and develop that revolutionary process. We stand with all those defending the Bolivarian Revolution, mourn with them the loss of a great socialist and revolutionary, and defend the continuing struggle for socialism.